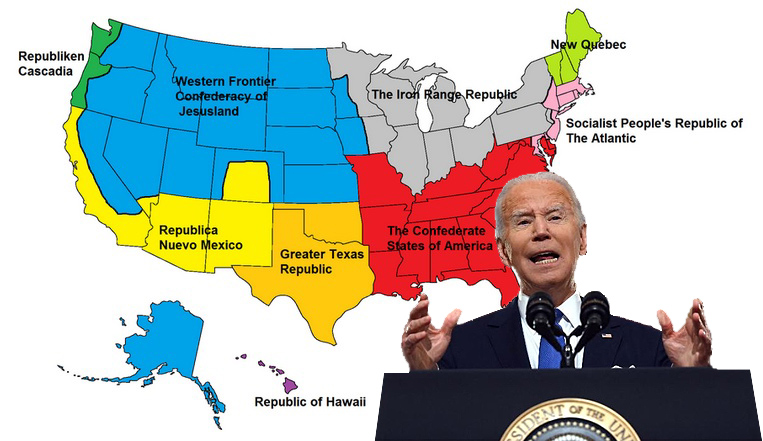 You have to go outside America to see what the speech means. No matter how historical or consequential the speech may be for Democrats and progressives, it doesn’t exist for Trumpians.

I was surprised but glad with Biden. He’s held back too long. But his necessary truth-telling and charismatic politicizing was at diametric odds with any presumption of future unity. It was a call to arms.

The more I try to look at America from the distant sub-Saharan perspective the more I think we’re headed for a break-up. I don’t think there will be civil war in the old sense.

Despite the arsenal of weapons Americans are known to polish up all the time, bullets are less effective than tweets. There’s no automatic weapon that can effect so many people at once as a viral tweet.

So our January 6th insurrection made its frontal assault more with colorful costumes and language than real bullets, because that’s what would go viral. The fact that ultimately the assault didn’t succeed means that the attack wasn’t good enough. But it was close.

Noble attempts to avoid division will have their ups and downs. The next one to watch is the fate of the voting rights legislation. If it succeeds the pliers holding the sides together will tighten ever so slightly. If it fails break-up is that much more likely.

If you think the last year’s relentless debate was all over truth and lies, you’re mostly wrong. The left posited the truth-and-lie division. The right posited thievery stealing truth. So the real debate was whether or not to compromise how reality is posited:

In the absence of legislative direction, how did Facebook and Twitter and Instagram mitigate this increasingly incendiary debate? They tried but not very well by closing down the more extreme accounts and posts. The wild fire wasn’t stemmed.

So I think we’re heading to ideological balkanization.

It’s not a new idea. A few months ago Politico warned, “A surprising share of Americans wants to break up the country.” The respected Foreign Policy publication said, “Talk of secession is on the rise among Americans—and already weakening the country.”

The very influential UK GQ said many months ago, “The United States so reviles itself, it might actually break up.” I ignored it at the time. No longer.