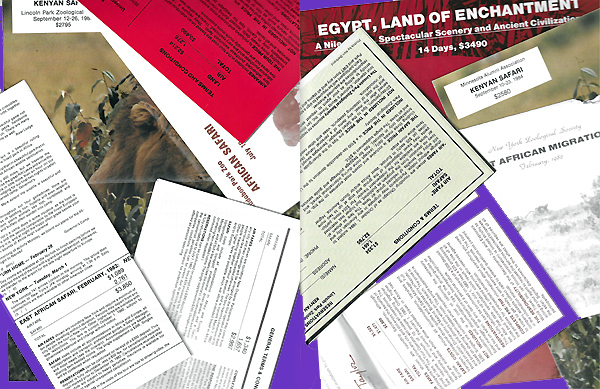 Travelers are venting their anger on us, their suppliers. They want to know why they can’t get their money back for trips that the virus scuttled. This is my answer.

When airlines were deregulated in 1984, a new era in transportation capitalism began. Before Reagan killed the CAB (Civil Aeronautics Board) everything in travel was regulated. I know. My businesses started in 1976.

In 1976 we were selling African safaris but in those days that also meant selling airline tickets. Travel companies like EWT didn’t sell through travel agents but through organizations like zoos and museums. So if we sold a safari in Kenya, we also sold the airline tickets to get there.

We were, have always been and continue to be a “licensed” travel agent.

We had to put up a cash bond with the government equal to the largest revenue month we had selling airline tickets. The point of that was if we failed or cheated there was money to compensate the victims.

The CAB regulated all air fares, the same way governments regulate utilities like electricity. Transportation in those way ole days before the 1990s was considered such a public necessity that allowing it to develop willy nilly through raw capitalism was deemed too risky. Government had to protect you. Novel idea, eh?

What all this meant was that the price a consumer paid was a lot more relative to today, because the government had to pay its employees to do the regulating and EWT was taking the risks for cancellation: we had to earn more on each product that was ultimately used to cover for those loses that canceled.

As Americans began to travel even I as a closet communist wondered if this system was right. I knew how awesome travel was. I saw in my clients’ eyes their surprise and wonder when they discovered something dramatic and exciting. Travel changed America for the better, and it seemed wrong to reserve that for the richer.

And the same assessment I was making with a client seeing the Serengeti sunset for the first time was the same with a grade school teacher recognizing the wondrous maturation of a kid who was introduced to Beethoven because the school board was giving the district money for music classes.

But… of course not all kids got music classes. There were inner cities back then where schools were laughable. It wasn’t fair. What was wrong?

Republicans won the argument. The market was being held back. Get the government out of our hair. The “only good government is less government.”

Well on one front the Republicans were right. Prices came down. Before the end of the CAB a safari’s air fare was about the same as the land price. So a $4,000 trip was $2,000 for the air and $2,000 for the safari. After the CAB was buried, air fares plummeted. Competition went mad. Today an economy class air fare represents about a tenth of the cost of a safari.

EWT’s insurance costs plummeted, too. We no longer had high licensing fees or high accounting fees to get our licensing fees. In a way things seem better!

But… airlines so lowered their prices for competition that they weren’t serving meals anymore! Can you imagine that? Their seats got smaller. Their ontime performance suffered. The flight attendants weren’t as nice. You waited two hours on the phone.

Hey guys, the Republican idea was that they if they didn’t make enough money for enough telephones that they should fail not make us spend our weekends waiting!

Because the governments bailed them out. Billions of Euros to Lufthansa, Air France. Billions of dollars to United, American. How many billions to EWT? Zilch. How many hundreds to the property owners in East Africa? Zilch.

Prices are cheaper, yes. But so is fairness.

Travelers who are angry now need to take a sedative and realize that how they feel is how all of us in the travel industry feel… except the airlines and travel insurance companies that the Republicans will always bail out, leaving the rest of us in the lurch.

But listen angry consumer, we’re in this mess together. We’re all in the lurch.

Same frustrations, same sufferings. It’s Covid, Jack, not some slimy travel agent stashing your money in her mattress. And if you got your United ticket refunded it’s because the government gave them money to give to you. Rest assured EWT would too, if the government gave us money.