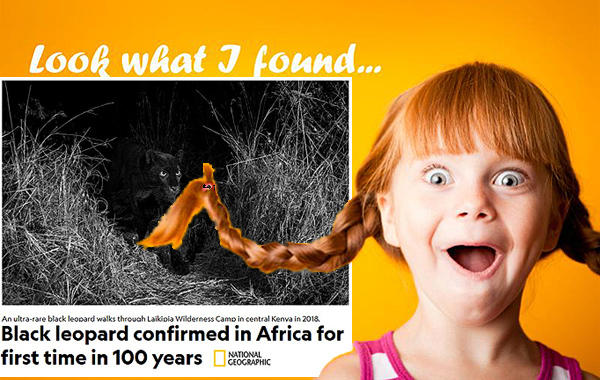 White man once again plucks discovery from black people’s commonplace. Didn’t colonialism end last century? What about slavery? There are many to blame, but once again, NatGeo’s at the forefront.

Two days ago the magazine reported in headline, “Black leopard confirmed in Africa for first time in 100 years.” (I expect they will be taking this down but I’ve got a screen capture.) They’re racistly wrong. A Kenyan photographer published photos of the same leopard five years ago and Kenyans today are livid.

Worldwide black leopards represent about 11% of the population. They’re not a separate species. Like black squirrels and black hawks they’re “melanistic.” Melanism is a recessive genetic situation that over-pigments the animal.

When it isn’t harmful, as is mostly the case with black squirrels and black hawks, the 11% genetic incidence easily manifests itself in the population.

So undoubtedly 11% of leopards born in Kenya are melanistic, but they don’t survive long enough to be seen.

Black leopards have been in Kenya as long as I have. Loisaba, Mukutan, Sasaab, Swara, Larsen’s, Saruni – at all these places I listened to excited guides tell me about their black leopards. I’ve never seen one, and frankly I’m not sure any of my excited guides had either, but clearly they didn’t make up the story. I never doubted the presence of black leopards.

This particular leopard which has now circled the globe with celebrity has assumed the name of Baghera. It was photographed in Ol Jogi, a small reserve near the popular tourist spot, Loisaba.

Intrigued by the same “excited guides” as pepped me up, Nairobi photojournalist Phoebe Okal went up to the Ol Jogi Conservancy and got great photos of black leopards in 2013.

So where’s the beef in this story?

Apparently, the most recent photos shot by San Diego field scientists are the first “HD” photos taken and the first ever published in a scientific journal.

I see. So that means they hadn’t been seen before?

What’s so disappointing is that so many news media just plucked up the NatGeo nonsense. Even CNN misreported parts of the story.

“…what is believed to be the first confirmed sighting of the rare type of animal in Africa since 1909 published in scientific literature.”

While that statement may be technically true, shouldn’t they have also mentioned Ms. Okal? Much less the commonplace reports of thousands of villagers?

The hullabaloo about who photographed what when first, of course, is incidental to the other misrepresentation that black leopards are not rare for unknown reasons in Kenya. As explained above, they’re simply not viable in an equatorial situation.

I’m glad this will boost Laikipia tourism. It’s not worth the racism that costs.