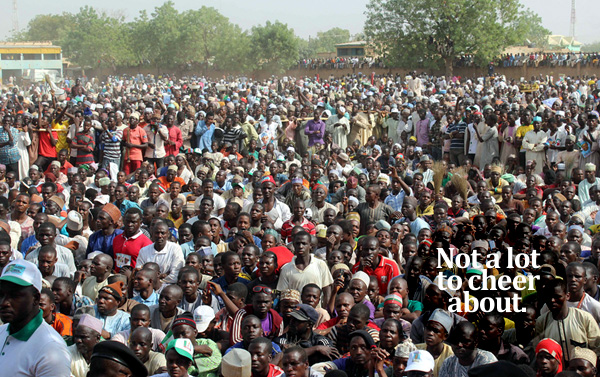 “Now,” a taxi driver in Lagos told the New York Times yesterday, “we just look at them. No one cares.” He was referring to the candidates for president in this weekend’s election.

Follow me: What’s happening in Africa, in Nigeria now, South Africa last year and elsewhere, proves that right now no one will beat Trump in 2020.

This weekend 84 million people of Africa’s largest country go to the polls for a presidential election. Muhammadu Buhari is running for his second term. His opponent is very much like him. Atiku Abubakar is about the same age, same tribe and race. The greatest difference Nigerians routinely point out is that Buhari is a military guy and Abubakar is a wealthy businessman.

Buhari first came to power in 1983 as the military commander leading a coup that toppled the civilian government. It was the 5th military coup since Nigeria’s independence in 1960. Then, and sort of like now, Nigeria was emerging in a way more similar to South American states than African ones.

There were all sorts of diverse reasons for the military coups, but they all shared an important one that gave them credibility among the population: fight corruption. It’s the reason the population accepted them.

But none were successful. So Nigeria kept ping-ponging back and forth between military coups and elected governments, always with corruption as the main issue.

I get so infuriated when westerners belabor African failures with the false notion that Africans accept corruption. They don’t and Nigeria is the best example. Nigerians have upended their political and social systems multiple times trying to reign in corruption. If Americans were as upset with corruption as the average Nigerian, we wouldn’t have kept half the governments we did.

Corruption became so rampant in the 2000s that Buhari, the former military coup leader, decided to come to power again, but this time democratically. He won hands down and Nigerians were thrilled. The first thing he did was set up a commission to deal with corruption.

But he failed. And now he’s running in a race that probably won’t even be minimally fair. He just fired the country’s chief justice and installed a crony.

Everywhere in the world the population is fed up. Fed up with corruption, racism, income inequality and capitalized education. People worldwide are too smart, today, too interconnected to accept the misjustice and inequities of the past.

But the choices given them by democratic processes or military coups have not yet been good enough.

A wealthy businessman in Nigeria is impossible without being mired in corruption. Buhari may have always wanted to end corruption, but now sick and old he’s been unsuccessful and with moves to silence his opponents, he’s become just as corrupt as anyone.

In South Africa, Jacob Zuma and his family may now be on their way to jail, but for 9 years and two elected terms he prevailed over every other opponent South African society put up against him. Finally with impeachment certain, he resigned. But it took nine years of hardship before the institutional politicians got rid of him, and what he’s been replaced with has elicited a huge collective yawn.

People are fed up. The system is not manifesting their concerns; elections or coups or communist conferences are not generating people capable of implementing the simplest of wishes.

It won’t matter if Buhari or Abubakar wins. The outcome for Nigerian society will be the same. “We just look at them. No one cares.”

Ultimately it’s all quite simple: The chief executive, no matter how enthusiastic or dedicated to the peoples’ wishes she may be, cannot make the system work for the people. The system is too institutionalized. All systems: democratic to communist. None responds to the people. They simply perpetuate themselves.

So right now in America not one of the hundred (is it?) announced opponents to Trump has the secret formula for changing the system, and people will have no motivation but to continue with the maverick.