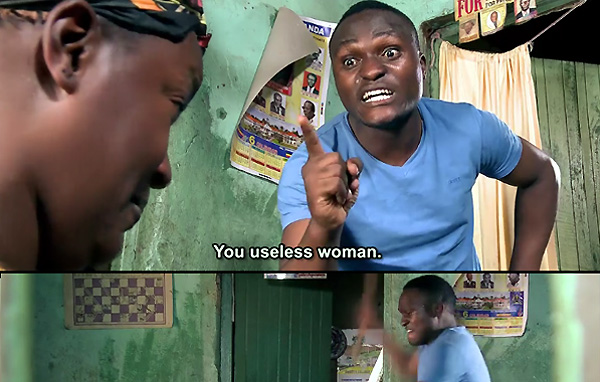 Halting abusive and dangerous behavior may take nothing more than showing that behavior to the abuser.

An Uganda NGO claims a 5% reduction in abuse of women in the home when the man watches a public service video about female spousal abuse. The key? The video tells a story rather than moralizes or conveys policy. The story – the reality – seems all that’s necessary.

According to Innovations for Poverty Action (IPA) a third of all households in the world suffer violence against women (VAW). Developing world police and social agencies are able to mitigate many situations curtailing major crisis.

But social institutions and agencies are weak or nonexistent in the developing world.

IPA produced a number of short, 4-8 minute videos of VAW and then paid to have them shown as commercials at Uganda’s ubiquitous “bibanda.” This is Uganda’s modern-day Drive-In Movie Theater, only the productions are videos rather than film.

The productions are excellent and many of the actors and actresses are professionals well-known in the East African film and television industry. These short videos are often of better quality than the feature video.

While most end with a narrator suggesting some type of positive action, it’s very restrained. Without credits it’s hard to know that you’re not just watching another entertainment production. The story is the thing: real and usually heart-breaking.

IPA’s claim of success is based on a Columbia University study which I think has made some ambitious conclusions based on their own evidence. Drawing on a complex series of evidential situations where bibanda exist or with individuals known to have attended them, women reporting violence, willingness of men to speak about VAW, etc. was shown significantly improved.

The final conclusion that the campaign resulted in a quarter reduction in serious violence is notable but somewhat hard to puzzle together.

Still, I think the approach is correct and we may not need a Columbia University study to convince us. For the same reasons that we know Ask Mr. Rogers or Sesame Street are valuable tools for enforcing good behavior, it seems reasonable that their antithesis – realistic stories of bad behavior – would restrict such behavior.

Seeing and accepting the truth is the first step. The inherent goodness of man takes it from there. Interceding with what is easily construed as pompous moralizing or oppressive ordering can elicit negative response.