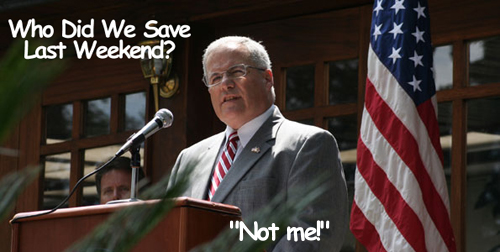 Obama fires few, but he just fired our ambassador to Kenya, Scott Gration. Was it over the Mombasa warning last week?

The news is that Ambassador Gration “abruptly resigned.” But we all know what that means.

Several weeks ago, his boss, Kenya’s former ambassador Johnnie Carson, arrived to discuss the future of this high profile diplomat who has courted the Kenyan press, staged humiliating performances (such as when he carried a bag of U.S. donated grain off a cargo ship in Mombasa in defiance of a dock workers’ strike there), and fired more than a few salvos about Kenya’s parliament off command.

Most informed and educated Kenyans loved Gration and his “honest” style. Just take a minute to read the comments that followed Nairobi’s leading newspaper story about the resignation.

The problem is that these readers are so used to politicians who do nothing in the open, that Gration’s style was refreshing, and I suppose, encouraging. The problem is, dear Kenyan readers of the Daily Nation, it might also have been counterproductive.

What was so ironic about his tenure in Kenya was that it was the exact opposite of his previous assignment, as the U.S. special envoy to The Sudan. Then, he was widely criticized as being too soft. In fact it was widely reported the Kenyan job was a way of getting him out of area before the two-country election.

So this suggests someone who marches to his own tune. And you don’t get bin Laden or defeat al-Shabaab by marching to your own tune. It’s a team effort, and Gration may have been a one-man show.

He seemed perfect for Kenya. He was born in The Congo, grew up speaking Swahili, and could tunnel into Kenyan politics in a way few outsiders can.

The bomb blast last weekend in a bar in Mombasa which killed three people (no tourists) and which today seems to have all the hallmarks of an al-Shabaab terror event may have been the straw that broke the camel’s back.

The U.S. alert was pretty expansive, and remains in place today. It prohibits all American government travel to/from the Mombasa area through Sunday. It advises all Americans not to travel there.

Now that seems reasonable enough, doesn’t it? I mean after all a bomb went off.

Yes and no. Yes because a bomb went off. No because two other bombs went off in Africa last week with no American warning even to tourists:

* Abuja, Nigeria and also * Gari, Bauchi, Nigeria. Abuja is where the American embassy is located. And the U.S. has recently contributed to the development of tourism in Bauchi.

And no, because the U.S. has already warned everyone who’s listening not to go to local Kenyan bars. And Kenyans don’t listen to American travel warnings, and it’s not our job to instruct them, anyway.

(Oh, and there was also a bomb in San Francisco, possibly “ecoterrorist,” with no warning. Apologies for being flip, but there’s a point here.)

The U.S. public warnings on Nigeria as a whole and Kenya as a whole are about the same. And quite possibly Gration learned of the potential bombing in Mombasa while his counterpart in Nigeria learned nothing in advance of those bombings.

But the effect of the quick fire, high alert warning in Kenya has devastating consequences for its tourism and what exactly happened? Were one of the 40+ luxury tourist resorts bombed, or the airport bombed, or a main highway bombed, or bridge or port? No, a local bar was bombed. Exactly as has happened multiple times in Nairobi recently and last week in Gari.

This is the signature terror of Boko Horam and al-Shabaab. They’re after locals, not tourists. They’ve said often they don’t mind bumping off a few of those, too, but their targets are local.

Now that doesn’t mean that my company EWT will send anyone racing to Mombasa, quite on the contrary. Several times this week I discouraged inquiries about beach holidays in Kenya. But we aren’t discussing where you should go for your vacation. We’re discussing the appropriate diplomatic response to terror intelligence.

Kenya is actually doing a yeoman’s job against terrorism. As I’ve often written their invasion of Somali goes beyond impressive, almost capable of changing my world view about fighting terrorism. So far, God Willing, foreign visitors out of the fight zones have been untouched. Kenya’s cooperation with America has led to multiple terrorists leader eradicated or arrested.

So actually, in the War Against Terror, Kenya’s doing pretty well.

This doesn’t mean you should take a beach vacation in Kenya. But it is probably good enough for firing the man who jerks to warn his citizens about an event whose odds are won’t effect them.