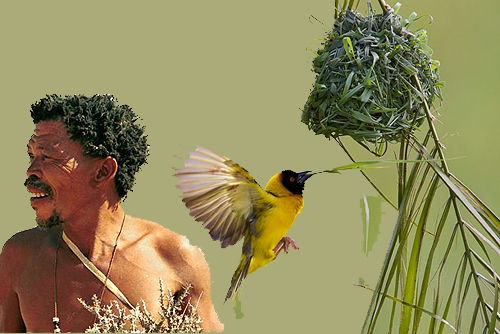 Saturday South African flags will fly at half mast as a bushman of the Kalahari receives a state funeral, a fitting tribute to a noble but conflicted lifeway in an increasingly modern world.

Did you laugh hilariously at the beautiful movies, “The Gods Must be Crazy”? The star and the cultural consultant for several of them was Dawid Kruiper, the San man who will be buried Saturday in desert dunes next to his wife.

The fame and fortune bestowed on him when the movie was released augmented an already proactive life dedicated to saving the bushman life style. In fact Kruiper’s activism began in the 1930s when as a little boy his family was evicted from its traditional lands.

He joined his family then in performing “folk ways” for tourists and his humiliation grew.

A Bushman’s humiliation is never external and rarely effects the sun-creased smiles.

The indigenous peoples organization, Survival, quoted him as having said:

‘I am a natural born. I have something inside of me that no one can take away. I am there always for my community, but I do things the natural way. I would say that our traditional lifestyle was much better… I am most comfortable like that, like the weaver bird. I can move anywhere any time. I can collect my home, my grass and rebuild my home… Like that bird, if I can just have freedom and rights, I would be happy.”

But to achieve the successes Kruiper attained, he had to change.

He took an Afrikaans name, to begin with. He studied Afrikaans and worked closer and closer with the modern community of Uppington, South Africa. His children are fully modernized. Only his wife continued to join him in the desert.

Yet he achieved many of his goals, and in 1999 South Africa ceded nearly 40,000 acres for “natural use” to the remaining Khoisan bushmen in Kruiper’s old clan. In effect the government deeded over a massive hunk of land to a handful of individuals.

Kruiper was also successful in getting both South Africa and Botswana to allow the remaining San people to continue to pursue traditional life styles in some shared Kalahari national parks.

These and many other San civil rights issues would have achieved far less prominence and chance of resolute success had Kruiper not crossed the line in the sand between purist living and modern politics.

His children will not carry on his traditions. Traditional San are disappearing. As he died in a modern hospital that helped him attain the ripe age of 76, schools, roads and enterprising little businesses are now found where endless savannah used to be.

There’s no reason to mourn this change. The house sparrow is also a weaver.