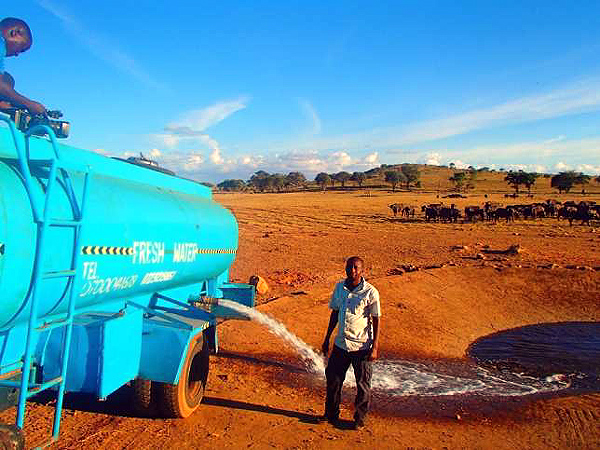 Sometimes helping animals is not … helping animals. Three Connecticut women through a crowdfunding campaign have raised nearly $300,000 to supply water to animals in a drought-stricken area of Tsavo in Kenya.

Patrick Mwalua has created quite a stir in Kenya. He hauls water daily to animals in southern Tsavo National Park effected by the current severe drought.

The drought is very severe. In my career I’ve seen several such droughts but this time it’s worse if for no other reason than there are so many more people – and animals – effected by it. There’s also the distinct horror that climate change defines today’s droughts as normal, and that the suffering they cause becomes unsurprising.

Yesterday 10 people were killed in a massive shoot-out between different herder groups in northern Kenya fighting over control of the last bits of grass available to their cows. A couple weeks ago a reputable East African NGO reported that almost half (43%) of Kenya’s 45 million people have recently gone for 24 hours without eating a single morsel of food, and that three-quarters are worried that they will soon run out of food.

This is what staggering means, and below these headlines are millions of stories of human misery.

So how should we feel about the nearly $300,000 Americans have raised to support Mwalua’s effort?

The $300,000 supports Mwalua trucking just under 3,000 gallons of water about 50 miles to a now dry water hole at the edge of a big game national park, four times daily at a cost of $250 per delivery. Animals now anticipate his arrival, and it’s fair to presume he’s helping to preserve those few elephant and buffalo that now wait for him daily.

Or maybe not. Wildlife experts warned me long ago that such ad hoc reactions to wildlife populations during droughts are wrong: elephants, for example, normally travel incredibly long distances in droughts to where water will be found. When water is provided in this artificial way it impedes their instincts, meaning that if the effort is stopped, the animal is doomed.

Nature replaced by man. Man is not as consistent as nature.

Arguments like this abound in wildlife science, and essentially it means if you dare tamper with nature make sure it’s permanent. The vast majority of ad hoc volunteer efforts like Mwalua’s are not permanent. Mwalua claims he will raise money to create a bore hole, which is what Zimbabwean and Namibian wildlife managers have done successfully for nearly a century.

But actually raising the money, obtaining the permits to drill and maintain the bore hole with a management plan from the Kenya Wildlife Service is no done deal. A single bore hole in an area of several thousand square miles could produce more havoc than assistance.

So I remain convinced that Mwalua’s good intentions will prove counter-productive. Worse, they reduce the efforts and attention needed to help people in the current drought.

People in modern societies are much more impacted by climate change than animals. That’s not saying animals aren’t effected. The 2009 drought in Kenya wiped out nearly 40% of Tsavo’s animal populations and it certainly did not wipe out 40% of the human populations in the area.

But most of that animal population – particularly elephants – rebounded quite quickly. Human populations devastated by climate or disease – as with ebola in West Africa, for example – take much longer to recover than animals. When people are effected, so are their institutions and communities. Animal societies and institutions are far less complex.

So a drought might temporarily have a much more devastating statistical impact on the numbers of animals versus humans, but over a longer term the damage is much more severe and extensive to the human populations than the wildlife.

This doesn’t mean we shouldn’t help wildlife. But we need to understand that wildlife is … wild. It flourishes unmanaged, and that means that in times of severe climate change crisis like a drought, animals will come out of it better than the humans.

So let’s get our priorities right. Let the experts, the scientists not the self-proclaimed wildlife advocates, tell us best how we might help the animals. They’ll begin by explaining that the best way to help the animals in an overreaching crisis like this drought is to help the people first so that they will work towards minimizing human induced climate change: reducing the crises the animals will otherwise have to face in the future.