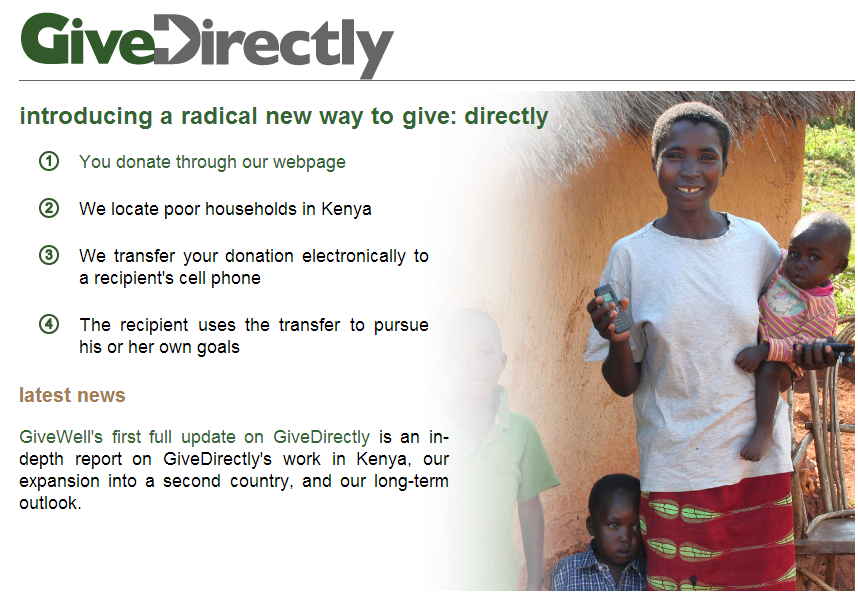 Several secret, unnamed villages in Kenya have become the “beta test” for the theory that a guaranteed income will eradicate poverty world-wide.

The Silicon Valley motivated charity, GiveDirectly disperses its donations to Kenyan villages in cash as a guaranteed monthly income. No tractors, no computers, no medicine, no scholarships or other training – just cash. The organization has operated since 2008 and believes it now has the data to prove its theory.

GiveDirectly’s results are causing a great stir. A New York Times Magazine article recently detailed the project’s work in a single village in Kenya. (The villages are kept “secret” for the obvious reason that the outcry and competition from so many other poor villages would be hard to manage.)

The simple project gives every resident of the village a guaranteed personal monthly income for 12 years. The monthly Kenyan stipend of about $22 is calculated to just raise the villagers above the poverty level as defined for their area. The term of project was presumed the length needed for the villagers to achieve self-sustenance.

The Times article basically applauds the effort, but it details negative effects that weren’t expected, especially those caused by missed payments (usually for technological reasons) or payments that split families or previous social groupings. But in the main:

“GiveDirectly wants to show the world that a basic income is a cheap, scalable way to aid the poorest people on the planet.”

Too simple, according to many economists.

First of all presume the theory works. GiveDirectly is buoyed by a study from the Brookings Institute that all the world’s poor could be raised just above the poverty line right now for $66 billion, a starkly small amount in a world economy that approaches $100 trillion.

But a one-time payment does not sustenance achieve. More careful analysis by such economic heavy weights as Berk Ozler of the World Bank, using the unproved notion of 12 years as long enough to achieve sustenance, puts the project figure near $3 trillion.

Nevertheless, GiveDirectly’s billionaire Silicon supporters see the early performance data of their project as so encouraging they are starting to pass around the notion that a cut-off date might not be a good idea.

In other words, they believe the overall growth of the economy created by their UBI seed money far exceeded their expectations. Self-sustenance is no longer questioned and seemed to have been achieved much more quickly than 12 years. So why stop priming the pump? The exceptional growth theoretically creates enough tax revenue to keep it going ad infinitum.

If this is true, the Times article posits, GiveDirectly is laying “the groundwork for an argument that a universal basic income might be right for you, me and everyone else around the world too.”

Universal Basic Income (UBI) is not new. Canada, Finland, the Netherlands and Scotland are discussing legislation right now to provide every one of their citizen’s with UBI. (Switzerland has actually flirted with the idea for the longest time, but once again last fall voted down UBI in a national referendum.)

Personally I’m fascinated by why the Times journalist, economics credentialed Annie Lowrey believes is at least one reason for Silicon Valley’s largess:

“Silicon Valley has recently become obsessed with basic income for reasons simultaneously generous and self-interested, as a palliative for the societal turbulence its inventions might unleash.”

Lowery believes GiveDirectly’s donors truly see on the horizon a “post-work” world in which robots and computers do everything. UBI is a necessity in such a world.

Personally I think we need to consider the moral imperatives just as readily as the economic ones. UBI might not eliminate poverty but it still might be the right thing to do.

And SciFi aside, I worry time and again that people with big hearts try to tackle big projects for which they’re simply not equipped. The Trump Era is good to them: simplification seems to be the buzz word of the day. But as Paul Ryan recently conceded, things are often harder than they seem.