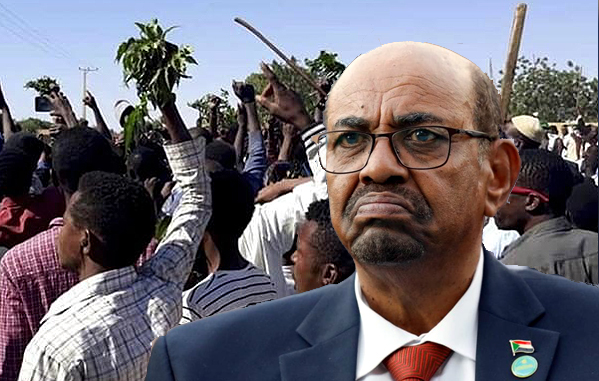 Sudan is not crumbling and cracking, like the last precious monuments in its desert being pummeled to ash by global warming.

It’s shedding its skin like a snake. A new reptile will emerge.

For thirty years the progeny of the violent Mahdi that defeated the British at Omdurman in 1898 have controlled this vast country. Omar Bashir has ruled so viciously that he was indicted as a war criminal by the World Court particularly for his massacres in Dafar. But like Zimbabwe there’s a complicated brain behind the face of the dictator, the military.

Nothing happens in isolation in this world, any more, not even in the formerly impenetrably closed and wicked societies like North Korea or The Sudan. The protests sweeping across The Sudan were triggered by a huge increase in the price of bread.

The price of bread increased for two main reasons. First, Sudan is having a harder and harder time growing wheat because of global warming. Second, Trump removed sanctions earlier this year that had been in place for decades. (This is itself a mysterious story that could be related to Putin’s desire to court the Shia rulers of this still predominantly Sunni country, as Russia’s MidEast objectives become clearer.)

Removal of sanctions triggered IMF involvement. To use the IMF’s resources — particularly loans for food production and distribution — Bashir had to accept certain conditions including reducing price controls.

The local currency almost collapsed and bread, fuel and many other commodities skyrocketed in price.

But like North Korea, and before in Cuba, the closed society’s support from the masses came arduously but assuredly from long stability, albeit in relative poverty. Education and health care, for example, were better over the long run than in most other African countries.

(With doctors now leading some protests, more peasants will resist the regime.)

All such benefits of the stable dictatorship were heaved out the window with the IMF demands and global warming. If Bashir balked at either, instability was immediately ensured. Accepting them led to the current crisis. It was a no-win situation for him.

The powers behind the curtains stayed there for 30 years precisely because a situation like this could arise. Bashir is in that sense dispensable and his removal gives the real powers-that-be a breathing period to regain full control.

Reports from media like NPR that there are issues of “freedom” driving younger protesters are fanciful reflections of media bias and economy, today. The protests began in the most remote parts of the country, where there are no ideologies but Islam. Foreign journalists rarely get permission to go there; NPR certainly can’t. Its report came from a journalist in Nairobi.

Bashir, in fact, tried to visit a remote village where actual local reports said he received such a cold reception that his visit was shortened to less than a quarter hour.

In Zimbabwe the powers-that-be, the military, flirted with different flavors of democracy to cool down the protests. Then as local Zimbabweans and world observers relaxed and began to hope for the better, the powers-that-be settled on their current carbon copy of years of autocratic rule.

That won’t be necessary in The Sudan. The country is too backwards and still too dependent on Islam ideology to be assuaged by promises of democracy. It will be much simpler and quicker than in Zim.

Expect Bashir to step down and a new Bashir to step up. And the powers-that-be will for the time being — unlike its neighbor Egypt — remain behind the curtains.