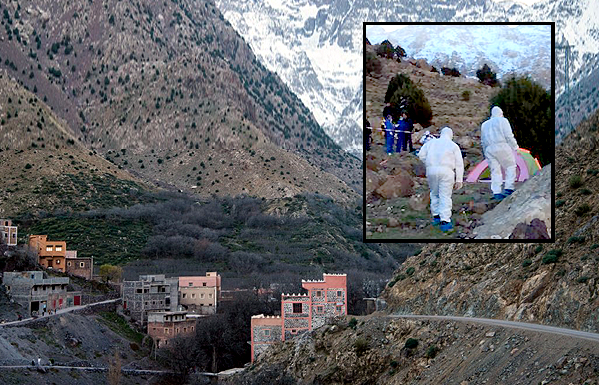 The end of the year isn’t going so well. After the Institute for Economics and Peace reported that acts of most terrorism continue to decline dramatically, two young Scandinavian hikers were brutally murdered in Morocco, and an Islamic State signature video of their actual murder is circulating on social media.

Morocco is not a place known for terrorism. The last incident was in Marrakech in 2011. The country prides itself on a very sophisticated police and intelligence network that claims to have essentially obliterated terrorism. Until now.

This incident occurred near the Atlas Mountains town of Imlil, the starting point for hiking the popular route up Mt. Toubkal. The New York Times reported that two Islamic militants set up a tent near their victims’ tent where hikers normally overnight before beginning the climb, and then murdered them in the night.

The terrorists videoed the murder then circulated it on social media, claiming it was retribution for continuing western attacks on the Islamic State. ISIS, however, has not claimed responsibility, although both the Danish and Norwegian governments have blamed ISIS for the murders.

Four suspects are being held by Moroccan authorities, including two pulled off a public bus headed from the area to Marrakech. Hiking and related tourist activity in this very popular and scenic area of the country continues to be suspended as authorities continue their investigation.

Ten percent of the country’s GDP comes from tourism, and almost a third of that during the end-of-the-year holidays. Moroccan Prime Minister Saad Eddine El Othmani called the incident “a stab in the back of Morocco.”

It’s likely that this end of the year will be among the safest ever for tourists going there. At the same time the extremely powerful security forces are likely to impede or suspend many popular activities scheduled in remote (and very beautiful) parts of the country.

The Global Index of Terrorism documents a third year in a row of dramatic decreases in most terrorist incidents. The exception is explosive, new increases in right-wing terrorism.

The nearly 75% decline in Islamic terrorism must be attributed to the rout of ISIS in the Levant. While I continue to think it coincidental it’s impossible not to think about this horrible incident in conjunction with the apparent choreographed tweet of President Trump to remove troops from the Levant nearly simultaneously with Putin’s press conference praising him for doing so.

The brutality of this particular incident is especially rattling. I hope that some of the right-wing crazies in the world actually watch the video, as I can’t imagine it won’t challenge their own absurd defenses. This can’t be rationalized. It’s either embraced or condemned.

So the future of tourism in Morocco? In a month or two it’s likely the graphs will again show Morocco a safer place to vacation than Key West. One of the inherent goals of revolutions is to impede reactions, to motivate all opposition to shelter in place. The world’s become a rough place, especially recently.

We can’t contribute to it getting worse.