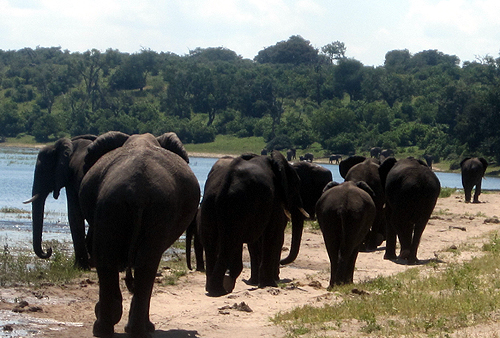 Chobe’s elephants are legendary, but what I saw this time is disconcerting. They are tame, inbred, their many broken tusks are like toothpicks, their family behaviors have broken down and they are destroying the Chobe forests. Is it time to cull?

There is a growing consensus in the affirmative. Even the conservation organization Elephants Without Borders, which can hardly be blamed for skirting the issues of culling, has come round to accepting it at least when human tragedies are caused.

These ‘problem elephants’ should be culled, according to a September, 2007, white paper written by EWB researcher, Dr. Michael Chase. Chase’s argument at that time was that a culled elephant would discourage other elephants from repeating the offense.

But that has proved untrue. And elephants causing injuring a person or destroying a small farm is hardly the major problem; it’s simply the one that gets the most attention. It’s the easiest to understand.

But there are far more serious consequences of too many elephant. It starts with the elephant itself. And the problem isn’t and wasn’t the elephant; it’s us.

Today we watched spectacular displays of multitudes of elephants in Chobe, playing in the water (actually swimming!), young adolescents sparring harmlessly, and at least three newborns just discovering the world. How can we not but simply sit back and enjoy this?

And the tusks which remain are pitiful. We know that smaller tusked elephants throughout the continent are a result of the years of cataclysmic poaching in the 1970s and 1980s, when “small tusks” become a survival mechanism. Only big-tusked elephants were wanted by the poachers.

But large, healthy tusks are essential to a sustainable elephant population, which uses them for all sorts of things, like digging for salt and in dry times, water. So throughout the rest of Africa we’ve seen the slow improvement in the size of tusks.

But not in Chobe. Quite the reverse, and whatever makes for strong, healthy tusks is now jeopardized.

And then there’s the elephant’s important family behavior. Males that reach puberty are kicked out of the family unit. Females remain with the unit forever with their children, and a grand matriarch leads the family. In Chobe, that seems to have disappeared almost altogether, simply because there are so many elephant they can’t separate themselves into any type of grouping.

I hesitate to quote numbers, because elephant population studies are notoriously wrong, skewed by the bias of the organization making them, and official government conservation numbers can be even worse.

Moreover, elephant are difficult to count, because they travel such enormous distances so quickly and do not necessarily repeat travel routes. But suffice it to say there are lots of elephant in northern Botswana and similar habitats in surrounding Zambia, Angola and Namibia.

I have been visiting Chobe since 1978. Hardly is my analysis scientific, but my photos speak volumes. Most of Chobe was a forest in 1978. Today, every excursion from Kasane into the park that was once a dense forest will encounter meadows and eroded cavities with fibrous grasses.

Chobe is a resilient ecosystem, sitting along the rich river systems that eventually form the Zambezi, and in an area with relatively high rainfall. But while it may be true that ecosystem recovery is more possible here than in other places in Africa, it is clear the degradation of the ecosystem in the last 30 years has been severe.

Why will no organization undertake a definitive biomass study?

Because everyone knows the outcome, and no one wants to author it.

Even the official government site for Chobe National Park concedes, “Damage caused by the high numbers of elephants is rife in some areas of the Chobe National Park. In fact, concentration is so high throughout Chobe that culls have been considered, but are too controversial and have thus far been rejected.”

I think we’ll have to leave it to the younger and less prejudicial scientists yet unencumbered by worries about funding and tenure from a public obsessed with the “little bunny” syndrome. But for better or worse, young scientists taking the issue head on are concluding that culling is now not a viable option.

Benjamin Golas of the 2013 class of graduates of the University of Pennsylvania veterinarian school is one of them. He writes about Chobe:

“I would hardly be a good conservationist if I did not bring up [the fact that] the region, which can happily and sustainably hold a few thousand pachyderms, is home to upwards of an estimated 140,000… and it shows.

Golas sees the most terrible situation looming. He believes that we have avoided culling for so long that now “the sheer numbers of elephants have made responsible culling impracticable” and there is no viable alternative.

No viable alternative? So then, what?

Perhaps the natural crashing of the population, a Biology 101 phenomenon that every college student learns: Left to nature’s devices, too many of one species will ultimately result in its cataclysmic decline, suddenly and often without warning.

It could be a virus that spreads like wildfire. It could be a syncing of estrus cycles caused by unusual weather. It could be a a new political shift in local human populations that just get fed up with the problem. But something will ultimately cull the elephant, now that we haven’t.

For years I espoused this position: let nature take its own course: Hand’s off. But now I see the danger of so doing, that as the elephant takes itself down, it may take much of the biomass with it.

Is it time to cull? 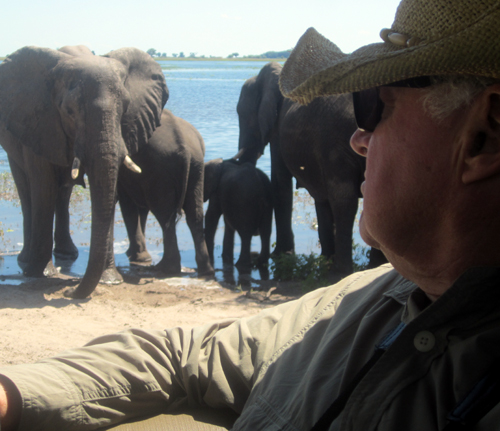