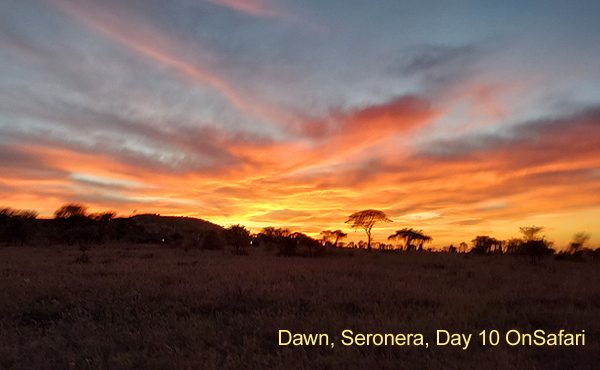 The temperature in my tent as I woke at 5 a.m. was 62F and it would undoubtedly go down a few more degrees until just after 9 a.m. Dawn over the Serengeti doesn’t bring immediate warmth with its brilliant light. It rained last night and the evaporation into the still dry air actually cools things down a bit more.

I flip on my bedside light because it’s still dark and the moon long ago set. The starlings which chattered so long as the moonlight irked them have been quiet for some time and there’s no breeze. The last of the lion grunts was several hours ago. This is the stillest time of the day.

The tent attendant brings me my early morning tea with a couple cookies right on dot as ordered at 5:15a. It’s taking me a lot less time than normal to get ready because I so burned my face the first few days in an open Landrover that I can’t shave and the usually long time it takes to spread on so much sunscreen is at least temporarily replaced with a thick scarf!

I go down early before the others and meet Tumaini and Zoya to discuss the game drive. Zoya’s heard there are lions on the backroad to Serena on a buffalo kill. But we’ve already seen so many lions and that road so twists and turns and disappears in acacia nilotica forests that we decide we’ll do that later and go first to the Grumeti River.

I think the group demanded two dozen stops hardly a mile out of the camp to take dawn photos. It was truly splendid and there were marabous sticking out of the trees and herons flying in front of the streaks of morning.

We hardly got a couple miles on our way when we encountered more lion. I then diverted the route so we could explore a big kopjes that always seemed to have a leopard, but she wasn’t there. We snaked along the Seronera River and saw hippo and a few little croc, Egyptian Geese with goslings and baboon yawning in the trees. They had yet to come down from their night’s sleep.

Finally we got to the main road and headed north and soon we encountered the migration, moving as they have for millennia south to north. The southern migration is slow and often poorly defined, compared to the frantic northern migration in mid-year. Still just seeing so many animals in so beautiful a landscape is plenty beautiful!

For the rest of the morning we saw lots of giraffe, waterbuck, topi, both smaller gazelle and a ridiculous number of elephant. There are just too many elephant around, today. Then I saw a red-face hyaena. You know what that means, so we stuck with him/her (virtually impossible to sex) until in his/her hyperactivity she/he brought us to the others that were devouring a small antelope tucked away in a ditch.

At Grumeti we found the normal group of dozens of hippos and a couple smaller crocs, but when we crossed the bridge and took a little use track, we came across several large crocs, one about 15 feet long.

On our way back I heard the alarm call of the vervet monkey signaling yet more lion. The little rapscallions have two types of alarm: one for snakes and the other for everything else, which is usually a big cat.

We followed its voice and sure enough there was a beautiful lioness flehmening with tiny cubs in tow. Something was going on that she would bring such young ones into the open. Perhaps there was a new pridemaster trying to kill them.

We got back to camp at 1 p.m. Time for lunch before the quick afternoon drive.