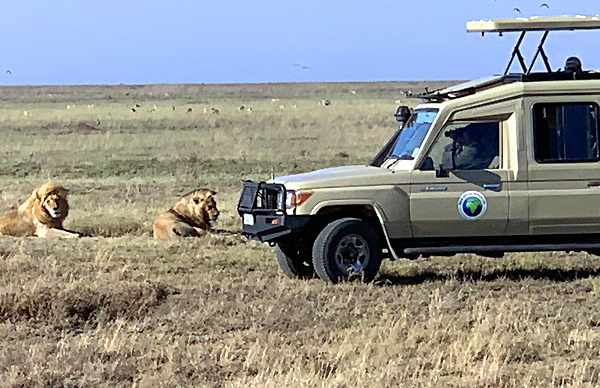 I’m often asked but I have no favorite animal. The Serengeti doesn’t attract me because of magnificent lions or angry elephant or dainty dik-dik. No single tree or bug or animal has any attraction at all except when you think of them all together. So all together is the most wondrous, my favorite, place in the world, the Serengeti.

But the “whole” is “happiest” when it rains, and it should be raining now. Steve and I encountered good rains up north. They sent the wilde running south anxious to gorge themselves on the lower altitude grasses. But then a few days ago it all seemed to stop and here in the far eastern Serengeti near Loliondo it’s dry as a bone.

The wifi for the last few days has been irritatingly irregular. You almost wish there just wasn’t any, but as a result this is an off-the-cuff’s blog without design or editing. I’m typing it straight to the blog.

No complaints, though, because this extremely remote area of the eastern Serengeti has rarely seen tourists until just pre-pandemic three properties were developed here. But it remains one of the most beautiful areas of raw wildness in Tanzania: grassland plains, marshes and beautiful kopjes. Literally hundreds of thousands of gazelle, and if it rains, add a million or so wildebeest.

The unexpected dryness this morning made my driving difficult because the eastern Serengeti is known for its fierce winds, especially during the dry season. So they slam into my cruiser making me slide and the moment I get off track it seems like a thousand pounds of dust sweeps into the car. Then even I can’t see and I go headlong into a deep pothole and poor old Charlie goes flying up to the ceiling!

Steve has the most experience, with numerous safaris under his belt and typical of these veterans they begin obsessing with what they haven’t yet seen. In Steve’s case it was a caracal. Well he found it a few days ago! About two minutes from camp as he came home with the beautiful sunset. And he reminded everyone right away, “Never miss a game drive, because you just don’t know what you’re going to miss!”

Hopefully, more organized reporting in a day or two…