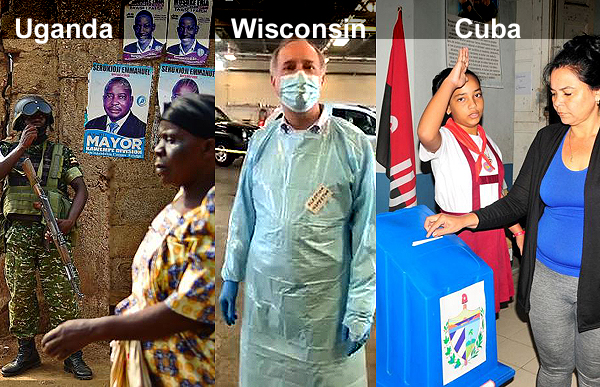 Didn’t know what to do. I’d really been looking forward to a few hours off, basically just reading in my little room in the Mille Collines. I’d sent my group out on their own to stroll Kigali. I started to lose interest until the message changed, delivered by the same high-pitched screech, “Friends arrested!!”

To this day I don’t know who called me, but I knew immediately that somebody in my group was in deep trouble. So I slipped into my sandals, grabbed my hat and headed out onto the street.

In those days most of the government offices in Kigali were clustered in the north end of the little town, only a few blocks from the tiny little square American embassy, notably on the corner with one of the only four traffic lights in the city. Everything happened on that street so that’s where I headed.

A block or so away I saw the huge congregation of soldiers lining the street. A little closer and I saw two of my clients surrounded by several of them. There’s a lot more to this story than what I’m going to tell you, today. Point for today? The soldiers were out in spades “enforcing” a national election.

Africa is replete with forced elections. Not only are they never fair, but the very fact that the populace which everywhere craves the freedom to vote has to be “forced” to vote should give us some significant pause.

If people want to vote, why do they have to be forced?

Perhaps, as in the case of Rwanda described above or for Uganda and a score of other African and Asian countries, there’s only one name on the ballot. Not voting, in this case, is the only way to express opposition.

Perhaps as was recently the case in Cuba, the bulk of the “poll watchers” were children enforcing the party line by shaming their elders.

Or perhaps, can’t imagine where, it’s because there’s a pandemic raging.

Really? It’s one thing to be stripped of choice or shamed by your kids into a sham expression of freedom. It’s another to be made to risk your life.

But I don’t really have to convince you of this.

All you have to do is watch one of the thousand reprises of the video yesterday starring Republican State Speaker, Robin Vos, in twice as much protective gear as most nurses today have in New York hospitals, telling people it was perfectly safe to vote.

Because we all wear our hazmat suits to our polling place. It is a bit of a forced class distinction as it usually hangs in the back of the closet with the also rarely used tux.

So this should give us pause, too. We know that most of the Republican hoards vote against their self-interest because they’re brainwashed. Is Vos brainwashed? He must be, because he can’t be stupid. He had to have some smarts to get where he is. So his intellect has been compromised by … what? Trumpian lies? Happy talk?

The shame that will usher Wisconsin into the history books of the next century is nearly incomprehensible. But the antics of its creators like Robin Vos almost remove it from the serious to the clownish and risk making us take it less seriously.

My amazement lies in the fact that America is now behaving day to day and minute to minute like the Africa that I negotiated a quarter century ago to make comfortable enough for my clients to visit.

Skills I never imagined that I’d need, now… at home.