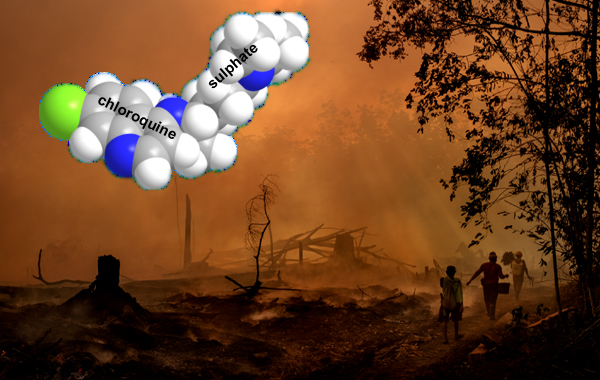 I know something about chloroquine. It was the reason I first got malaria.

It’s also the reason I’ve lost about 50% of the vision in my right eye. I listen with malaria shivers to a TV president espousing chloroquine as our vial of hope, and I’ve come to realize that it isn’t just evil that’s destroying our world, today. It’s also hope.

I took my first malaria pill a half century ago, 150 mg of chloroquine sulphate. I took it with trepidation. Kathleen and I had worked so hard for two years in Paris towards my singular mission to get us to Africa. When we finally succeeded we reacted like a ping pong ball in a Chinese supermatch.

We bought airline tickets on a whim, later to be stranded in Cairo. We wrote letters to our future employers, randomly assuming postage that wasn’t enough. We raced home to get married, because the Kenyan government wouldn’t have us as simple “partners”. We even managed to sneak a night’s honeymoon at Niagra Falls!

So when we got to London on our way down to Kenya, it dawned on me that we’d taken no medical precautions. Now give me some slack. It wasn’t too many half centuries before that that African explorers penetrated the unknown jungles with little more than Glenfiddich. Of course most of them died, and that’s the memory that froze my ping pong game in London.

We were in the best place in the world for advice. Not all memories are acute from that time but Kathleen thinks we probably got our “malaria medicine” from the London School of Tropical Medicine.

Now known as the London School of Tropical Hygiene and Medicine. I knew it well enough. I’d failed as a journalist in London before joining Kathleen in Paris, but during my stint there I’d filed a story about the LSTM.

Founded in 1899 with a hefty donation from an Indian Raj and staffed by the best scientists of the day including Aldo Castellani and his junior assistant, George Carmichael Low, the LSTM knew more about infectious diseases in 1970 than IBM knew about programming.

The earliest Spanish explorers in Peru (mid 17th Century) learned quickly from the Incas that an extraction from the Cinchona tree helped prevent the “fever.” That was quinine. Refined very slightly over the next three centuries it provided the world’s best defense against malaria.

A third of all the U.S. and Filipino soldiers in the Pacific Theater in World War II came down with malaria. In Buna and Gona virtually every soldier got malaria usually multiple times and hundreds died.

Quinine was hard to get during the war because the world market was centered in Java, a colony of The Netherlands, and the Nazis occupied Holland. So General MacArthur ordered rapid R&R and the manufacturing of the drug was seconded to Bayer Labs that had its own prototype of chloroquine as early as 1934. Bayer, however, had suspended further development because its animal tests suggested the drug was “too toxic.”

So the “miracle drug,” chloroquine sulphate, albeit its toxicity came too late for the soldiers in World War II, but was available to some extent for the Korean War. But by the middle of the 1950s it was receiving wide use especially from NGO workers sent to clean up the mess of World War II.

It was prescribed with a host of cautions. That’s why I took it with trepidation. We were posted to a highly malarial area so the risk seemed necessary. We took the pill weekly with a big meal. It still made you feel a bit sick.

I took it for less than a year before I got a bad case of cerebral malaria. I remember sitting nearly comatose certain I was going to die with Kathleen prying open my mouth to spoon soup into it. A local NGO came to our rescue with a big syringe of “Nivaquine.” This was an injectable version of chloroquine sulphate in massive amounts.

I survived to add to the many like me who were proving that chloroquine was becoming ineffective in equatorial Africa. Soon it was ineffective almost worldwide as the ingenious malaria parasite grew immune to the drug.

The drugs that followed weren’t much better. Bottom line for all us who lived in Africa: Ditch the drugs and use physical precautions. I did that for the rest of my life, getting malaria only twice again.

Meanwhile, my right eye started to lose sight in my thirties. Scientists at the University of Illinois – Chicago studied me and claimed it was because of my use of chloroquine. The loss of sight continues.

Trump for some reason likes the drug he can never name correctly. He speaks in tones of hope: “Why not try it? It can’t hurt.” : Hope, followed by a lie that like a sycophant prostrates under the facts scuttling any natural discovery of the truth. I know how toxic and dangerous this drug is: it nearly killed me.

Now I understand how our contemporary dark culture works:

We’re already in a dystopian world. Everything around us “is broken.” The deal we were given was rigged against us. The “elite” have kidnapped our destinies… Even if all of this is true the appropriate response isn’t just to mouth hopeful phrases packaging subsequent lies.

But that’s America: Heavily religious, gluttons for hope. The evil culture that runs America, today, is probably intellectually incontinent reacting through the same levers of trial and error that brought them to power. And now I see that the most successful of those dark tools is the invocation of hope.