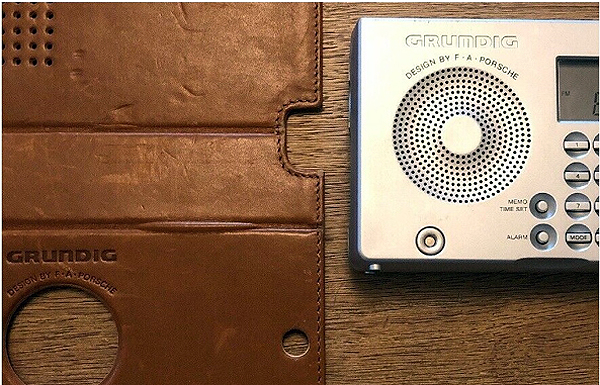 You’d think it was a Gucci purse. Large pocketbook size, beautifully encased in a thick wet brown leather case stylishly pierced symmetrically, its oversize steel buttons were actually easy to open, hard to close. Wish now I’d saved it, but when the antenna broke I ditched it.

My Grundig Shortwave Radio. I’ve been thinking nostalgically about MGSR recently as I read with increasing terror the “professional” advice that we should consume less media in this time of such unrelenting stress and anxiety. The fact is that we should all be consuming more.

MGSR was a life-saver. I slept less so that I could listen mostly to the BBC but also to Deutche-Welle and France24. Most of the time I wasn’t expecting a calamity when I tuned in late at night after everyone else had gone to bed or very very early in the morning before any stirrings in camp except the swift pattering of the gerbils on the tent roof.

But that’s the point. If I’d missed the unexpected calamity, my clients and I would have become a part of it!

MGSR got eight of my clients and myself out of the Rwandan genocide, let me know what parts of Kenya were safe during the civil war there, and warned me that terrorists were waiting at Waza national park where we avoided going once we knew.

I was obsessed with MGSR, pulling out my little tune-in guide and walking around my hotel room trying all the different directions for the antenna until I got good reception. I probably listened to 100 hours for every ten minutes of critical help it gave me, but that help was monumental, at least once perhaps the difference between life and death.

We must all treat today the same way.

I was infuriated by a recent Psychology Today article where Brad Stennerson advised, “You shoot for the minimum news necessary. Not a second more.”

This is precisely what the dummkopfs in the Weimar Republic did that facilitated Hitler’s atrocities. Stroked by economic privilege the greatest disease Germany’s elite suffered was apathy but it slaughtered millions others. And it wasn’t coincidental; it was the strategy of the Brown Shirts for neutralizing dissent.

This is certainly a different time than Nazi Germany, but like the cowards of the Weimar you should not retreat from the mounting horrors because you’re suddenly too worried about it! Yes, it’s too overwhelming to grasp it all, but grasp every moment you can. This is your human responsibility.

Allow your anger to bubble with each bit of infuriating news, and just manage that anger. We’ve grown so inured to bad news that risking fewer bits is going to turn you off altogether. With so many lies, so many distractions and so much politicized it’s never been harder to navigate to the truth. But if you give up before getting there, it isn’t just that you’re doomed, you’ve doomed us all.

“We are all finding our way right now,” she began carefully. “For people concerned with overuse… [keep] a diary of technology use for a few days in the same way that you might keep a food or exercise log… It is counterproductive to try to change your behavior without knowing why or to what.”

Listen to the news. Please. Prepare for the fact that the rapid fire dissimulation coming from the evil cabals is not likely to provide many moments of respite.