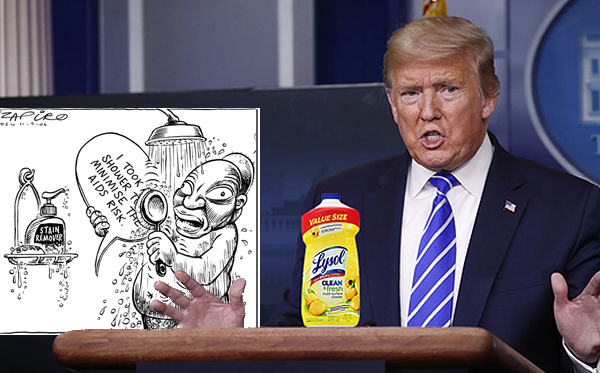 Imagine about a year from now when much of the world, even a few parts of Africa, start to really manage the virus. Imagine an airplane actually flying from London to Johannesburg. Imagine, too, that Americans are banned from these flights.

I just finished an hour reading the sarcasm, fear and disbelief – mostly from Africa – about Trump suggesting “injecting” disinfectant into the body to kill the virus.

These emotions rope off America from the rest of the world. Today’s African commentary was particularly worrisome that the medical advisors sitting beside him didn’t jump up and scream, “NO!!!”

America isn’t just the laughing stock, but the King Kong monster of the world.

About a decade ago I worried about writing in this place about something as fearful and unimaginable in my usual sarcasm about South Africa‘s president.

I worried that it would sound racist. But the President of South Africa, unbelievably, had told his nation that to “shower well after sex” would avoid AIDS. He then went on “to explain” that AIDS was not a virus but a bacteria.

It was such a dangerous proposition that I researched it carefully and if you go back to that blog those ancient links are still active. He really did say that. I really did have to blog about it.

It’s one thing for an otherwise populist politician like Jacob Zuma to make such a ridiculous claim, even if he was the president of South Africa. It’s quite another when a big chunk of the country actually believes him.

There was no Fox News or Sean Hannity in South Africa at the time. Zuma was trashed and never again made such an outrageous claim.

No, we can’t. Because we aren’t just fools, we’re monsters. And the rest of the world is beginning to see that.

I can really imagine a time after November if this aberration of humanity is reelected that America becomes ostracized from the world, and not just for its stupidities but for its dangerous inclinations.

Yes, I can imagine a year from now a plane or several taking off from Heathrow for Joburg and without a single American allowed on board.