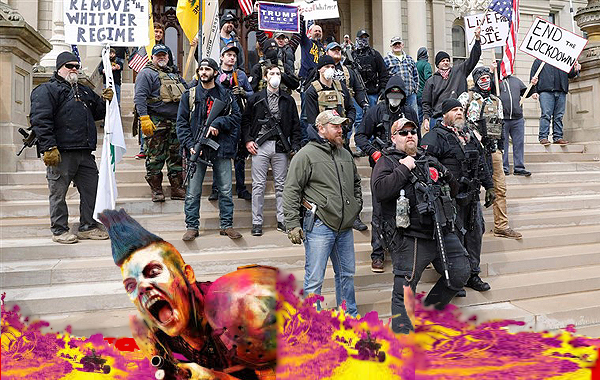 Ready for a new threat? It’s just as ethereal and deadly as Covid-19. It strips away our naive precautions just as efficiently and wrecks havoc far beyond its relatively short existence when it’s finally put under control. In a word, “worse” than the virus. I rely specifically on my African experience to tell you about this.

I experienced it mostly in troubled times and situations, a singular threat to my protecting my group. But it also walloped me when I least expected it, when everything around me seemed just so perfect and peaceful.

Rage is both a symptom and a predictor. The very few times that I was held up by bandits were terrifying. Not because anyone was hurt or even significantly inconvenienced really, but because of the temper and demeanor of the assailants.

The first time was in Kenya’s Northern Frontier. (I would never let it happen, again.) I was quite young, in my twenties, constantly amazed at everything I was seeing and doing. Some tall men in beautiful tribal regalia along the road waved us to stop, holding in the air hands of beautiful beads.

They did not want to sell us trinkets. The moment the car stopped another half dozen rushed out of the bushes and started banging the car with their wooden staffs. I jumped out leaving my heart in the front seat and was immediately slammed against the boot by the perpetrator whose eyes were the size of pineapples. His lips were wet. I could have slipped out of his grip for all the sweat that was there.

Yes, they got most of our money. They didn’t understand passports. They took all the cameras, their obvious principle loot. It was all over in a minute. But it set a rather upsetting tone for the rest of the safari, and as you can see, the memories have lasted a life time. They are as organic and terrifying this moment as they were almost 50 years ago.

I experienced the identical emotions in a number of other and radically different situations over my life time:

As you’d expect, many involved conflicts with soldiers or policemen, but also with my own staff early on if someone of a different tribe offended them, or in more later years if they learned that someone close to them had died.

I remember a precise moment in a modern supermarket in South Africa when I protested to the clerk that my credit card should work and she transformed into some ogress kali so intimidating that I left the store without my stuff.

Swahili speakers often call this “wazimu.” The etymology of this word is fascinating. Zimu means God. The plural prefix “wa” signals that the noun belongs to a class associated with living things. So “mtu” is a person and “watu” is people.

But wazimu doesn’t mean “Gods.” It means “madness.” It’s more derogatory than “madness,” really. If you looked at someone across the room, lifted your chin slightly and said softly to your compatriot, “Wazimu,” you’d be saying that that person over there is dangerously crazy. Avoid.

Rage explodes but it builds slowly by repeated and terrible bouts of misfortune.

The tribalism instilling rage in Africa often emanates from centuries of enmity. In more cases than not this originated in slavery, as one tribe colluded with the Arab slavers against their neighbors as a ploy to protect itself.

Often the minor technological advancements of one tribe, like iron forging a millennia and half ago in Rwanda, was a treasured weapon ensuring the dominance of one tribe and the rage of the other that has led time and again to such unbelievable genocide.

Even today the control of great sources of water like the Nile by upriver Ethiopia damming its source for electricity infuriates downriver Sudan and Egypt risking a modern war.

Deprivation leads to a singular form of rage. I expect the clerk at the supermarket in South Africa was not able to buy as much wine and chocolate as my credit card could, yet she was forced day after day to ring up the luxuries of the privileged.

I don’t believe any person comes into this world evil. The bandits’ rage that slammed me onto the boot of my Defender 110 is as much that miserable person’s suffering as wont, and more to the point, the horrible psychic dilemma caused between them: He didn’t want to be a criminal. But he wanted to eat.

Did you read about the demonstrations in the last few days by wazimu protesting shelter-in-place?

Can you imagine what this might be like six months from now, with unemployment at 30% or more? Have you noticed any more car rage? I have.

The virus is here. It has wounded our body and our economy. When it pricks our soul the rage will explode.