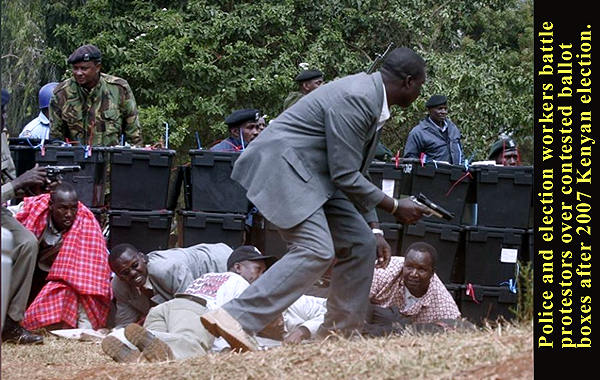 Planning totally unconventional. Nevertheless an MOP was established over the years that I used religiously.

Whenever the date for an African national election was announced, I pulled out a pile of yellow pads and started figuring out how to keep my clients from being there when it happened.

It became a joke. My very good friend and long-time fellow guide, Steve Taylor, was a loyal client when he was the director of the Sacramento then Cleveland Zoo. He’s never stopped reminding me that the itinerary someone buys from EWT is rarely actually operated without a change.

Frankly, because there have been so many African elections with little regularity as to when they’d be held. In America we know it’s the first Tuesday of November.

But in most places in Africa the date for the election is set irrespective of when the last elections were held and often with little advance notice.

Historically there’s just never been an African election (excepting South Africa) where the whole population, regardless of political bias, didn’t hunker down and try to hide the moment they returned from voting.

City families would go to the countryside or remote beaches. Businesses would announce extended closures. Markets would be postponed.

Now in all fairness most of the elections in sub-Saharan Africa did not end in widespread or disastrous violence, despite the fact everyone was sure they would. But the more democratic the country was, the more likely was violence. The larger the turnout, the more violent still. The fewer candidates, the more violent.

Essentially the more clearly polarized the choices available to the voter, the more violence was certain. Rigged elections even in Africa of late are becoming harder to do. Heavily influenced elections are another thing: Bots are pretty effective, for example. But the violence emerged not because the elections were rigged, but because the losing parties claimed they were.

And because of this disruption very often the winner didn’t win. The court or the election commission or the army stepped in and declared a victor not based on the voting results but the likelihood of subsequent peace.

You know where I’m going with this.

Two presume the election results as duly recorded will show Trump winning. Now this is not because he actually wins – not even the electoral college – but because the election was so heavily manipulated. Here’s how:

SCENARIO ONE: Vote by mail stopped by Congress. Second virus wave. Only in Wisconsin where those who didn’t die from voting in their last election stumble to the polls does Trump lose.

SCENARIO THREE: Led by McConnell and joined by Graham, Tillis, Capito, Cassidy, Cornyn, Cotton, Daines, Enzi, Ernst, Gardner, Hyde-Smith, Inhofe, McSally, Perdue, Risch, Rounds, Sasse, Sullivan and Isakson, Trump will claim multiple cases of election fraud. He will prove this by revealing that he successfully voted in both New York and Florida. The Supreme Court will uphold his claim and since there’s nothing in our constitution regarding what to do about a fraudulent election, it will simply be annulled until the next one in 2024.

SCENARIO FOUR: The third of America which will never understand that they have been committing suicide since 2016 will raise arms. This won’t be a drastic civil war, but there’s enough free carry throughout the Republic to divide it very much as during the Civil War. It will be interesting to see what happens to D.C.

SCENARIO FIVE avoids any contestations and the Republicans win fairly:

The Republicans will sink or swim with Trump. Sooner or later they’ll realize there’s no chance of swimming. So they dump Trump for Romney, who is far more charismatic and practiced than Biden.

My yellow pads are out.