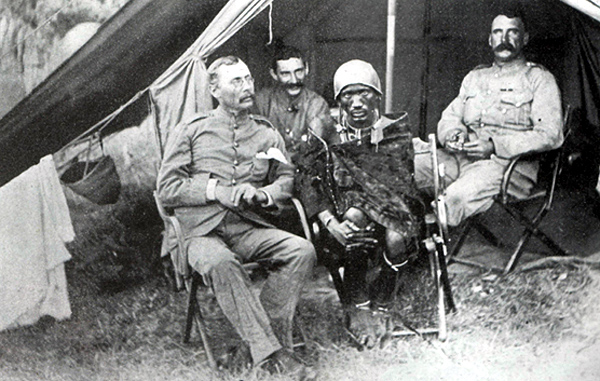 British and Americans a century ago thought Kenya would become a major cotton producer, thought hippos ate bushes (they don’t), and were shooting so many elephants that most of the large tuskers were already gone.

“Few can realize what a drought means [here] where all life… is dependent on the regularity of the rains.” That’s one of the few notions old colonials got right. Why did they get so much else wrong and how does that reflect on us today?

The European colonial era in Africa was mostly a mistake. The old texts that I mine to understand the era suggest the Europeans were successful conquering the continent principally by exploiting African tribalism. Then, once conquered (unlike Asia) most of Africa turned servile.

The result was a colonial grossly over-confident with even the best of them failing to do basic homework, with Africans baring themselves to inhumane exploitation.

I see a significant parallel with the present. “Colonials” are today’s 1% and the rest of us are “Africans.” The numbers are revealing.

European colonization was a constant thorn-in-the-side of democratic governments. Once in power for a very short time, politicians and civil servants of every stripe alike realized what a mess the colonies were, but they were publicly constrained by electorates that were wildly in favor of them.

Champions like the government-maligned Dr. Livingstone – very much like evangelicals today – were the tail wagging the dog. Populists wanted empire building. They saw it both as their manifest destiny and security.

The manifest destiny was civilizing the uncivilized world by converting the pagans to Christianity and revealing capitalism to the deprived. Livingstone stomped around Britain with flags marked “3 C’s” for Christianity, Civilization & Commerce.

Security because even back then there was fear that educated non-whites would flock to the paradise the whites believed they lived in. So give them a secure, and moral home, and they’ll stay put.

It didn’t matter that this was all breaking the bank and completely hypocritical and wholly short-sighted. So the governments responded in part by encouraging and often subsidizing “homesteading” in the colonies by their own citizens. By the 1920s emigrant Europeans made up about 1% of the African population.

But these colonials, like Capt. A. T. Curle of the King’s Rifles who wrote most of what I referenced above in an article for National Geographic in April, 1929, managed to get most everything wrong.

Their facts were wrong. Practically every tourist I take to Africa today who watches hippos for all of a few minutes learns that all they eat is grass. Not bushes. It’s all they can eat. It’s an essential part of the whole ecosystem. (Tilapia eat almost exclusively excreted hippo dung, which is grass poorly digested.) While this may seem a trite example to you, it’s endemic throughout colonial literature.

And their analyses were equally as wrong. Capt. Curle, like the very respected eminent American taxonomist Carl Ackley, shot elephant left, right and center, while lamenting that all the big tuskers were gone.

You wait to kill only elephants with big, long tusks, and soon there are no elephants with big, long tusks. And it’s not just because you’ve wiped them out in one region. This was the turn of the 20th Century. Gregor Mendel had fully disseminated his widely accepted theory of genetics which was enthusiastically taught in middle schools by the middle of the 19th Century!

Capt Curle seeing a nascent cotton industry take hold along the Nile, somehow reasoned that the Lorian mud swamp would do as well!

So to this very poor intellectual positioning, add fear of immigrants.

Ultimately I believe this colonial quagmire contributed substantially to World War I, which contributed to World War II which finally led to a brief period of wonderment I enjoyed as a child in the 1950s (when, by the way, Africa was finally negotiating independence).

That’s a transitional period of more than 30 years. Where are we today?