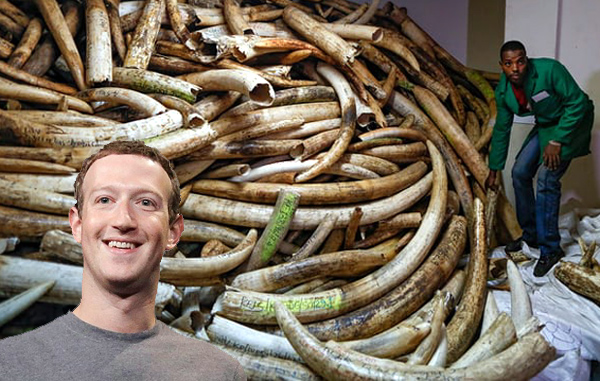 An AirKenya report from Nairobi last week claims that Facebook continues to contribute to the sale of ivory and rhino horn despite having joined a group in March opposing such sales.

Kenya is currently celebrating a robust return of its elephant population following years of loss through ivory poaching. AirKenya is one of the main tourist airlines serving the country’s booming big game national parks.

Both ivory and rhino horn trading are prohibited by international treaties signed by almost all the countries in the world. After last year’s scandals revealing that Facebook and Yahoo-Japan were contributing to the sale of banned animal products, Facebook aggressively changed course and joined the Global Coalition to End Wildlife Trafficking Online.

Details were scarce but the published AirKenya accusation of June 18 maintained that subsequent to joining the network Facebook “did absolutely nothing to curb the rampant activity of wildlife criminals on their network. There are reportedly thousands of posts on Facebook offering to sell or buy ivory right now.”

Trading ivory or rhino horn is not a political issue in the U.S. – at least not yet. And certainly there are many problems Facebook probably considers more pressing: particularly in Europe it’s getting appropriately beaten death by a number of European commissions over a variety of more universal issues.

But the great irony in this tale is that it’s likely that whatever Facebook “is”– Zuckerberg, his board, his financiers – that it does not support the marketing or sale of banned animal products. Joining the global network against such sales was a clear indication of this.

Problem is, “Facebook” seems to have a life well beyond the control of its human shepherds.

Last year China truly completed the lengthy implementation of a ban on the sale of most ivory that it theoretically began years ago. The final seal of approval crashed the market for ivory whose prices remain depressed as a result.

Hong Kong, China’s errant and misbehaving child, is not normally one that drags its heals on progressive issues compared to Mother China, but it had done so until early this year, when it, too, fully endorsed the ban.

China’s actions were so powerful that the last Asian bastion of ivory trading, Vietnam, got a real boost from international thieves and miscreants. It’s now the last main center for global markets of ivory and other banned animal products.

Tech savvy Vietnamese set up hundreds if not more sites on Facebook and elsewhere for ivory trading. These are the sites that the AirKenya notice cites. Since they aren’t public sites, I’m unable to reference one to confirm the AirKenya allegation.

Facebook untethered is evil untethered. It’s also transparency and democracy untethered, which is the reason China has tethered it.

But how ironic that China now bests America in saving the elephant and rhino.