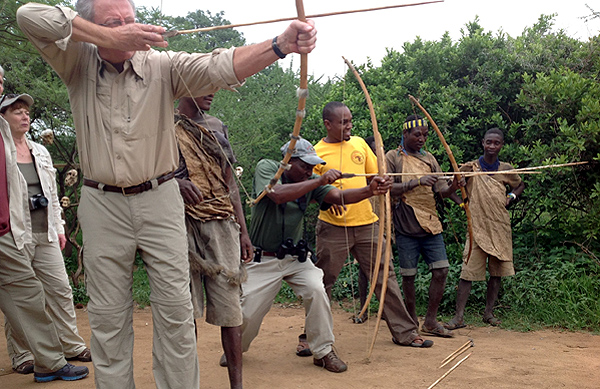 The #MeToo movement has infected Early Man. It just shows how charged culturally society is, today. Unable to govern ourselves sanely by political means, the cultural side of things explodes and like all sudden bursts of power often over-reaches.

Several women early-person scientists interviewed recently by NPR claimed that women were more important for the survival of the group than men in “early man” societies, implying that misogynistic attitudes by the mostly male college of early man scientists suppresses reality.

NPR interviewed Kristen Hawkes of the University of Utah who has spent a good amount of her career studying the Hadzabe people who live in northern Tanzania. These are an extremely interesting group of people who in modern times have been terribly mistreated and as a result have been unable to integrate into modern Tanzanian life.

Hawkes has alienated quite a few of her colleages by using “Backtime” cultural presumption – deducting behavior in ancient peoples based on the current behavior of their distant offspring. The technique is mostly discarded by paleontologists, and particularly so with reference to Hawkes’ work.

(Hawkes calls the Hadzabe “Hazda” to underscore her affinity with current Hadzabe who use that contraction. Not dissimilar to calling Americans “Dudes.”)

Hawkes’ central theory is that the contemporary Hadzabe barely manage to survive and principally by their women gathering plants rather than by the men hunting. Hawkes back-extrapolates this to presume early-man women were no less important than men in victualing the tribe.

“The Important Grandmothers” theory was broadcast by NPR a few weeks ago, but it’s very old news. Hawkes has been promoting this theory all her career. It first gained popular attention in 2012 when the Atlantic summarized the debate. BTW, that debate wasn’t about how early Hadzabe lived, but whether Hawkes science was legitimate.

Early man’s increasing brain size relative to body weight required much more protein than needed by apes, for example. (Caveat: very recent science suggests that it wasn’t brain size so much as brain structure. Either way, we know that this evolutionary advancement that was restricted to hominins required more fuel than the old brains.) Hard evolutionary evidence for this was the emergence of incisors, a dental tool for eating meat.

Plants don’t provide enough protein. Apes – which are largely plant eaters – don’t need to consume other animals. Early man with an advancing brain did. He had to hunt. The anatomical difference between man and woman is not in dispute. The male was much more adapted to hunting than the female.

We know from anatomical analysis, and even more so from the Hadzabe’s click speech, that they are closely allied with the San people of southern Africa, the Bushmen, who are generally considered among the most primitive extant peoples on earth.

The few surviving naturalist San even of today maintain a remarkable hunter-gatherer society. So the San like the Hadzabe have been studied by some anthropologists to provide some type of insight to early man’s behavior: “Backtime.”

With the San it parallels nicely with traditional theories. The types of tools, patterns of migration, diet, etc. all support a wide range of important presumptions about the hunter-gatherer behavior of early man, where it is the man whose victualing is paramount.

The Hadzabe are different. Hawkes documents women Hadzabe providing more food and useful food than the men. Actually it’s not even that. She doesn’t include all Hadzabe, excluding modern acting Hadzabe who nevertheless often interact with the traditional groups.

There are cogent explanations why Hawkes’ restricted data is true, none of which could possibly have been the case with early man.

The most important one is that there are so many fewer animals left in the Hadzabe’s ecosystem. (Note in marked contrast to a much less changed Kalahari where the San live.) Those animals that remain in the Hadzabe’s region tend to take harbor in nearby Lake Manyara and Tarangire National Parks, where Hadzabe are forbidden to enter.

There are other reasons. Several generations ago the then communist Tanzanian government decided there shouldn’t be primitive peoples in Tanzania. In the case of the Hadzabe they rounded them up and put them in reservations and forced them to farm potatoes.

This lasted for more than a decade. There are still other reasons:

Because of the Hadzabe’s purported lifestyle they’ve now become a major tourist attraction, (which I find despicable). They now earn and manage relatively large sums of money which they use at … stores. A young man who might have years ago learned to hunt now goes to school to learn English and math.

NPR’s neglect in checking all this out is discouraging and typical of much of their African reporting. But it begs the question whether the mostly discredited Hawkes work enjoys some simpatico resurrection from the #MeToo movement.

The problem with social revolutions is that they lack governing mechanisms, checks-and-balances that render justice. In this case, just reasoning.