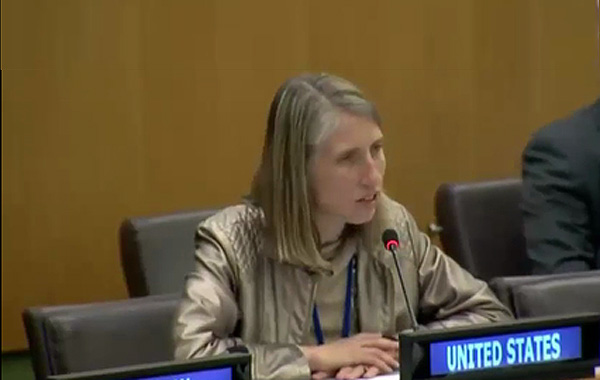 Five days after Solemaini was killed the UN Security council convened a special meeting for the escalating terrorism in Africa’s Sahel.

Speaker after speaker noted how terrorists are winning military conflicts in the region and that basically, the UN had to beef up its military peace-keepers in the area.

Then came the U.S.’ turn to speak.

U.S. representative Cherith Chalet, whose stunning resume features her honor studies at the evangelical Bob Jones University, called on the Sahel countries to improve access to education and jobs and to “prioritize dialogue over violence to address differences.”

It was embarrassing. But embarrassing we can handle by now. Irresponsible, we can’t. And the irony that fell over the meeting like ice fog when Chalet spoke with no reference whatever to either “terrorism” or the dramatic killing of a “terrorist” of Iran was palpable.

Deutsche-Welle recently reported that the European Union led by Germany had committed to assisting the sizeable French military throughout the Sahel.

This was not just a big step, but an historic one for Germany that is constitutionally bound from much use of its military abroad.

The day after the UN meeting Deutsche-Welle reported that 25 soldiers were killed in an “jihadist attack” in Niger and that 18 UN peace-keepers were injured in a similar attack in Mali.

Those incidents and others prompted French president Macron to host a meeting today of the leaders of the five Sahel countries to discuss the escalating terrorism.

Solemaini is dead. The wars in the Mideast continue. But terrorism by the accounts of all sane diplomats and leaders has moved 2000 thousand miles closer to New York, into the Sahel. And what does America do?

Kill an Iranian and tell the leaders of West Africa to provide more jobs.