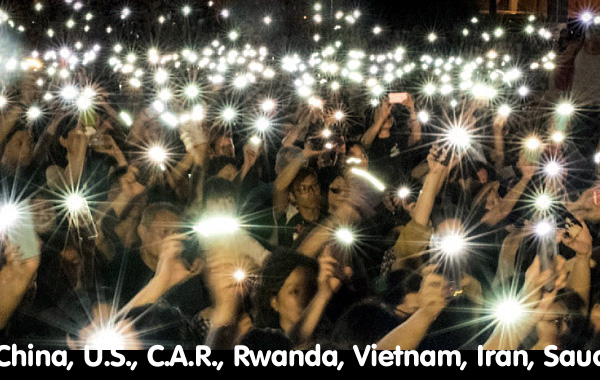 Does this mean that America is three times as bad as Kenya and has now devolved into a third world culture?

The Human Rights Watch’ “World Report 2020″ implies exactly that. “In 2019,” the report states, “the United States continued to move backwards” towards the cabal of wicked dictatorships and failed states. Have we really fallen that far?

The report begins with a scathing attack on China. There’s no question in the minds of Human Rights’ activists that China’s global ascendance represents the single greatest threat to human rights.

Kenya was cited especially for its ongoing crackdown on journalists and bloggers and bashed for the inhumane responses of its security forces and Army (trained and maintained by the U.S.) to alleged terrorists and criminals. Ethiopia and Sudan were scolded for regressive police and security force responses following mass democratic protests.

South Africa was criticized for slow implementation of its gender equality laws but more severely for the xenophobic attacks on foreign nationals legally living in the country.

Canada was called out for not yet mastering its goals for equal and fair treatment of its indigenous populations and growing resistance to immigration by some provinces.

So no country won any gold standard for reverence of human rights. That’s not what this organization does. But none of the above – not even the terrible gender policies of Tanzania or the summary imprisonments of government critics in Rwanda – could eclipse the rancor aimed at the United States.

Look folks, in 2005 as an example, the United States got into the report mostly because of Guantanamo and then because of our horrible incarceration rates and the death penalty. This year we’re the largest section after China and our infractions include ripping young, sick kids out of the arms of their parents, putting them in metal cages and denying them medicines.

Old troubles like child incarcerations, income inequality and health care denials, senior abuse, freedom of speech, not to mention of course immigration and foreign policy that’s wrecking havoc on the rest of the world, all have grown horribly worse, according to HRW.

Is this fair? Is the U.S. really more a threat to human rights than Ethiopia or The Sudan?

Before answering that question recognize that over the course of modern history the U.S. was the leader in achieving human rights across the world.

Yes, we have an unbelievable 50,000 under 18-year olds annually detained in adult prisons or sentenced as adults, disproportionately people of color. Yes, to the extent that accelerating income inequality compromises freedoms we’re the leader and have been for some time.

But even today our freedoms of expression are greater than in most countries. Women can sit at bars alone unafraid. LGBT do not have to worry they’re headed to the death chamber. We don’t have to fear as in Tanzania or Rwanda that a blog criticizing the president will land you in jail.

That’s why it is fair of HRW to present the U.S. as second only to China as a global threat to human rights. We weren’t just leading the pack, we kept it together. But the “yet” grows frighteningly and when the leader demurs the system collapses. The pack disintegrates. I don’t have to worry about writing this blog.