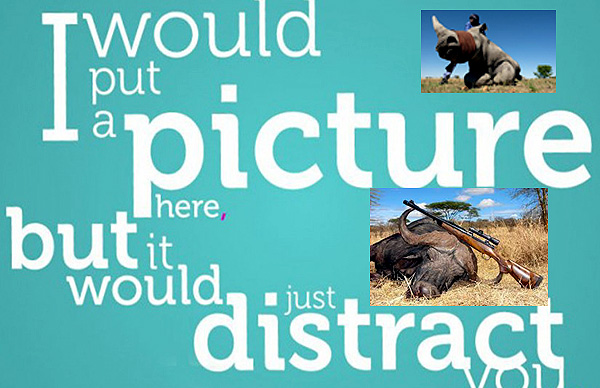 The reaction to the Chinese decision to reverse a policy that prohibits the use and limited sale of endangered species is a successful distraction from much, much more serious woes.

The policy change is nowhere near as bad as exclaimed by conservation groups. They – and most Chinese – are being duped with the same tactics used by Trump or Duterte or Le Pen and all the other crazies close to running the world. Don’t let them get away with it. Focus.

The use of rhino and tiger parts in local medicine, as well as allowing specific limited commerce in ivory, has been banned in China for a quarter century. The vast majority of the Chinese population supports this. Chinese celebrities are fully behind it. It benefits only dying old men and it is as much a political move by the currently troubled Chinese administration to “rile up the base” as Trump’s laughable 10% middle class tax cut or his absurd claim he will rescind America’s birth right.

It’s a remarkable insight into Chinese politics. It’s actually the Vietnamese and organizations in Singapore and Hong Kong that continue as the main threats to endangered species, not mainland Chinese.

The widely decimated policy change is intentionally created for the world audience as much as the Chinese.

On the one hand, it’s a slap in the face to The West, which led by Trump is abandoning the relationships built with the Chinese since the Kissinger years. The Chinese know how reactionary conservation groups can be, and they knew this would stir the pot.

On the other hand it’s a warning to the growing dissatisfied groups within China as well, especially the young.

The young are the ones most immediately effected by tariffs and a collapsing world economy and order. Just like capitalism everywhere, last in-first out. Whether it’s been the benefits of home ownership or decent paying jobs, the squeeze is on in China just as it’s starting everywhere.

This rebuke by Chinese authorities to a popular, fresh identity that many young Chinese embrace is a simple statement that the seas are getting rough, you better follow exactly what the captain tells you to do.

So it’s a distraction. It’s bad for tiger, rhinos and elephant, and no doubt the black market might be ever so slightly more motivated, but really not very much if at all. Rather, it’s a way of keeping us all from focusing on the much greater threats facing the whole wide world.