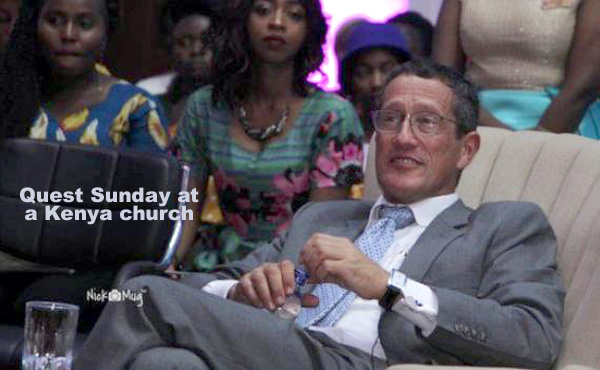 I’ve never thought of Richard Quest as a crusader for anything but saving pennies. But this weekend in Nairobi he rattled that country’s ultra-conservative stance against gender equity and may, actually, have moved the country in a good direction.

Many of Quest’s followers don’t know that he’s openly gay, because it’s not something he’s integrated into his CNN persona, having only once (June, 2014) specifically announced being so on one edition of Quest Means Business.

But after a week enjoying Kenya in anticipation of his return on the KQ inaugural flight Sunday, he accepted an invitation from Bishop Allan Kiuna to attend Sunday worship services. Kiuna’s Jubilee Christian Church is an independent self-styled evangelical church that openly welcomes and supports gays in a country that demonizes them.

Kiuna is hardly a model global citizen. Many consider him a religious huckster of the sort that wander the continent (and even the U.S.) riling up believers for their own self-aggrandizement.

Kiuna and his self-designated Reverend wife, Kathy Kiuna, successfully oversee 15 churches in Kenya and five in other countries, and are doing obviously well by it. They live a lavish lifestyle and make no apologies for doing so.

It’s hard to know how much of this Quest knew or whether, in fact, that would matter to someone wishing to demonstrate solidarity with the LGBT community in Kenya.

Like virtually all African countries on the equator and north, homophobia is pervasive. In neighboring Uganda certain gay infractions carry the death penalty. The current Kenyan president, Uhuru Kenyatta, has suggested Kenya ought to consider the same.

The Kenyan clergy has always played a progressive and vanguard role in the country’s troubled history, but with the exception of Kiuna is stone silent on the issue of LGBT rights.

One of the current administration’s most vocal critics of the LGBT community is the head of Kenya’s film board, Ezekiel Mutua. He banned a number of gender challenging films, including the Cannes Film Festival’s Rafiki and South Africa’s Wound, plus dozens of other award-winning foreign productions. He even banned a Coca-Cola commercial that he felt challenged traditional gender relationships.

Mutua called Netflix a “threat to the country’s security.”

Dubbed Kenya’s “moral policeman” Mutua told NPR that Kenya’s recent leaps to democratic freedoms had to be undertaken “in the context of our cultural values” which currently by federal statutes massively restrict LGBT rights.

So who would you expect remarked on Quest’s visit to Kiuna’s church?

Mutua, of course. The switch here is that he praised Quest for doing so. (He was also the person who gave Quest and his entire crew the freest possible access during their week in Kenya.)

Speaking specifically about Quest’s church visit, Mutua remarked, “If Quest’s main mission was to highlight life changing ventures and innovations in Kenya, then today he was in the right place.”

Mutua went on to further praise Quest saying that “His sexual orientation has nothing to do with his work, “ and that “Quest may be gay, but he is a top notch journalist.”

There was little applause from the LGBT community that immediately cried, “Hypocrite!”

We’ll see. And whether Mutua and others in Kenya may have changed their attitudes or like the evangelical huckster Kiuna were just taking advantage of an American celebrity? Or… did penny-pinching Richard Quest just make a bold investment?