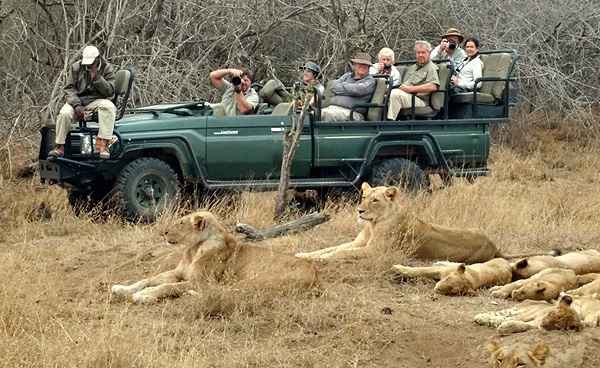 Last month as my South African safaris for this year were coming to close I had a startling personal experience that really challenged my current view that most of the world – not just America – is a mess.

As far as South Africans at least are concerned, America is much more of a mess than Europe.

The two safaris I guided in South Africa each spent six nights at the same two safari camps in private South African reserves. These are lovely camps operated by an excellent company, very upmarket. The posh experience of actually staying at these camps – one of which included individual swimming pools with each room – is a major reason people come here.

Neither camp is very large. Unlike East Africa, in South Africa’s private reserves you fly or drive from camp to camp and then must use vehicles that the camp itself provides for game viewing.

Because the camps are smaller, and because each of my groups occupied nearly 3/4 of the available rooms, I knew that some of us in each group would have to share safari vehicles with others booked into the camps that weren’t a part of my group.

That’s quite routine. It is possible to request private vehicles for a group, but that’s usually denied since there just aren’t enough vehicles per camp to do so. When it is available because the camp may not be fully booked, it’s extremely expensive.

So I was surprised and thrilled when we were assigned our own “private” vehicles for my first safari. I figured that there must be no other guests, and this was icing on the cake for my guests.

Southern African safari vehicles – unlike East African vehicles – are all open-air, open-sided, with three bleacher like rows behind the driver’s cab. The camp has the right to put 9 people in each safari vehicle, three per row.

I had 18 people, and we had four vehicles to ourselves!

I was surprised when we went to dinner our first night to notice that the dining room was absolutely full. So the lodge wasn’t not full. They had to have driven in special vehicles for us all the way from Johannesburg, a day’s journey.

When the same thing happened at the next camp, I sort of dismissed my thrill and surprise because EWT does provide this company with considerable business every year, and as tourism begins its downturn it’s becoming more and more competitive.

And after reporting this back to the Chicago office, one of my employees sent me back an email suggesting the camp was giving us special considerations because I was along. I don’t mean to be immodest, but over the years that often happened.

It happened again when I arrived with my second group. I wouldn’t have taken any new notice if I hadn’t seen one of the other camp vehicle’s stuffed to the hilt (9 pax) with other guests. In some of our vehicles we had only four people!

So I sought out the manager to thank her profusely. She demurred nicely, thanking me for my business.

But the next day she sought me out for a longer conversation.

She said she followed my blog and understood my political biases and so felt she should advise me of the actual reasons for the policy that was giving us such “special treatment” on game drives.

“I’m afraid, Jim,” she said, “the Head Office has instituted a new policy with regards to all American groups.”

Before I recount the policy explained to me, it’s important to note that this company serves mostly Europeans. In fact, mostly British and French, and as many Dutch and Germans as Americans.

“Our European guests,” she explained, “complained too often of Trump supporters and provocative conversations, so HQ has instituted this new policy. We have to keep all Americans separate.”

She hastened to add: “Now if it’s Asian or South American or even Australian, then we would mix.”

She saw how startled I looked.

“I realize especially with this current group, that isn’t the case – your group is much more like you, and most of our Americans are the same.” She paused. “In fact, I’d say 80-90% are. But it’s that 10% that can be so ugly.”