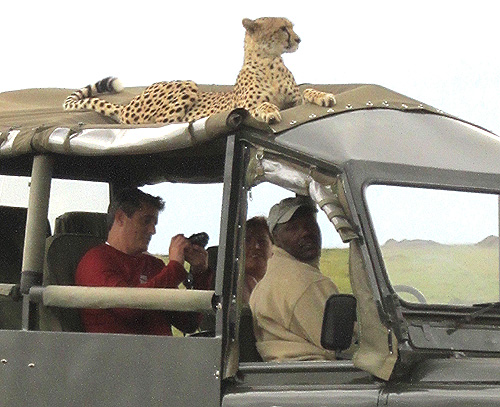 Cheetah jumping on cars went YouTube viral this holiday season, and traditional criticisms from wildlife managers was starkly absent. Is this OK?

The newest video had nearly a quarter million hits this morning but it is hardly the only one. I stopped counting at 20 separate YouTubes of cheetah on cars, and there are countless stills on Flickr and even more individual photos on private blogs.

My own experience includes at least a dozen such incidents. Most of them were in Kenya’s Maasai Mara, but some of the most memorable incidents were in Tanzania’s Serengeti. The striking difference as relates tourism of the two areas – the Mara is generally very crowded and the Serengeti generally absent of crowds – has led me to believe that there is something hardwired in the cheetah’s brain that gives it a potential pet syndrome.

Hard-wired may be too strong, and I can understand how generations and generations of cheetah being unmolested by people could nurture up the same behavior, but either way, the cheetah is clearly the closest thing to a pet you’ll encounter on a big game safari.

Not every cheetah displays this friendly behavior. I’ve encountered many which are extremely skittish, although none of these frightened little beasts were in the Mara – they were all in the Serengeti or more distant places like Kenya’s northern frontier. The best I can remember virtually every cheetah in the Mara looked friendly.

Why do some, then, but not all jump on the cars?

It’s a pretty simple answer. A hungry cheetah begins its hunt in an incredibly laid-back fashion. The eyesight of the cat is so powerful that it can scan the plains with almost the same facility as a falcon surveying the turf below.

The best view is the higher one.

And like falcons and other raptors, prey is often discovered but then doesn’t always trigger an attack response. I suspect this is often because it’s just too far away, but there’s probably dozens of other reasons as well.

Perhaps the cat’s level of hunger just hasn’t reached the threshold of action, or perhaps the cat also sees competitors in the area and the cheetah is the smallest of the big cats, easily chased off its prey by a host of other animals like hyaena.

In any case, the cat on your car roof seems incredibly relaxed, hardly hunting. But that’s exactly what it’s doing. Fat cats – non hungry cheetahs – will never be found atop a car. 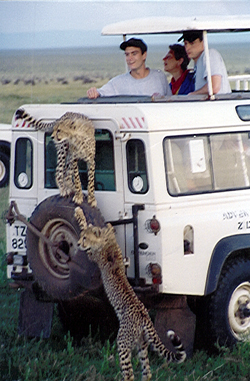 There is one exception. Youngsters learning to hunt will often play on the car, hungry or not.

Not too many years ago, researchers and rangers were highly critical of these tourist interactions. Pamphlets were placed strategically on lodge reception counters and I even remember a series of “ranger talks” warning guests not to approach cheetah too closely.

The argument was that the cheetah was easily distracted by tourists, and would therefore often have its hunt disrupted. I found that specious.

But there are definitely reasons to avoid too close an interaction. Cheetah is the only cat whose claws don’t retract, so it has no power to decide whether to inflict a wound or just give you a love swipe if you accidentally surprise it. 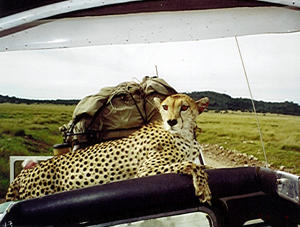 I learned this when Kumati, an old cheetah that lived by Naabi Hill, jumped on my car as we were headed to the airstrip for a flight. No matter what we did, we couldn’t get him off. Finally I stepped out of the car and swiped him with my hat, which he ripped back in turn!

Of my many memories of cheetah-on-car the funniest one was with two football players from a prominent American college traveling with their much smaller mother. We stopped in the middle of the Serengeti – virtually all alone for miles and miles – to watch a young family strolling along the plains.

Several of the youngsters jumped on the spare tire on the back of the vehicle. The right guard shoved his mother towards the front of the inside of the car, then ripped out one of my seats and pushed it towards the cheetah shouting, “Down Mother!”

A big male cheetah might reach 90 pounds. Most females are around 60 pounds, and this means they are generally about the same size as your lapdog.

Is there any real harm with all this?

I don’t think so. As I learned with Kumati, don’t try to pet them! But conceding a better view and just enjoying the experience strikes me as mutually beneficial!