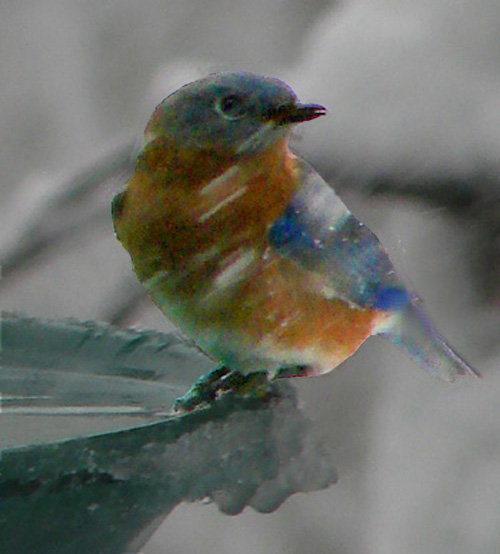 An American bluebird perches tentatively on a heated bird bath during the Blizzard of 2012. The photo was taken by Carol Mantey. Her home is near mine in the American Midwest.

These birds were nearly extinct before American conservationists began to actively support them. They are cavity nesters like African hoopoes and hornbills, but more and more of their habitat was being destroyed, and even in areas protected as forest reserves, poorly trained rangers would clear away all the dead wood providing no suitable trees for nesting.

American conservationists began building bird boxes and erecting them along cultivated areas and the birds began actively using them. Today in my area of the Midwest the bluebird is thriving.

A little problem, though. When they were truly wild, few remained during winter. They migrated south like many birds, to warmer climates.

As the newly reconstituted species, many seem to have forgotten about migration. So the same conservationists that built their bluebird boxes for nesting now provide food during the winter and heat bird baths (as above) so the bird can have unfrozen water in temperatures that fall to -30C.