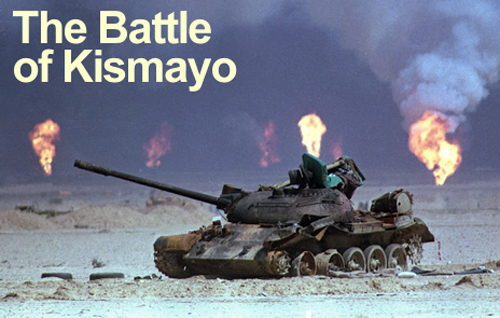 Within a week we’ll know whether the Kenyan invasion of Somalia is the true beginning of the end of al-Qaeda or the start of increased instability and terrorism in Kenya. I’m pretty pessimistic and damn mad. But the outcome of the battle of Kismayo will tell all.

Kismayo is a city. A functioning, wealth-producing large coastal city with a proud university and clean streets. It’s the defacto capital of al-Qaeda in The Horn, the center for terrorist planning, administration and growth.

It’s the only true geopolitical epicenter of terrorists in the world. In Kismayo terrorism leaders don’t hide in caves. They go to work in offices. They collect taxes. They use big computers to concoct strategy, to build internet sites, to train young militants in actual schools, to organize and implement arms deals. This isn’t Wajiristan.

And until this moment, Kismayo was untouchable. Since Sunday, planes have bombed the city. Sea-launched missiles hit the city center. The Kenya military is marching towards Kismayo.

Kenya’s major newspaper called the expected encounter “The Mother of All Battles.” Western terrorist experts see it as a “high stakes game for Kenya.”

There is remarkable calm in Kenya. In fact, it’s absolutely ridiculous! The rest of the region and much of the world is overwhelmed by news from the front, including the first two Nairobi city bombings as al-Shabaab begins its guerilla war inside Kenya. But one reading the Kenyan newspapers today has a hard time finding any war reports at all!

The country is in denial. The diaspora is in denial. Even if the battle is successful, the effort is likely to bankrupt the country. Tourism is doomed for the forseeable future. Even political stability, so creatively accomplished for the last four years, shows the first stages of unraveling.

I hate making this prediction, and I really want to be proved wrong. But Operation “Linda Nchi” will fail. It will likely fail the same way Ethiopia failed five years ago when western powers propped up its invasion of Mogadishu the same way they are currently propping up Kenya’s of Kismayo.

Ethiopia – with a far more sophisticated army than Kenya’s – marched into Mogadishu and installed a very weak government then rapidly returned home leaving behind a mess that was supposed to be cleaned up by 8-9000 non-Ethiopian African Union soldiers in a few months. It’s been three years. It’s still a mess.

Even though Kenya’s military is far less sophisticated than Ethiopia’s, I think this is the likely outcome, because terrorists survive by running away, never by making a stand. Their success comes in suicide and car bombs, subway attacks and shoe bombers. They don’t do tanks well.

The west seems to think that we’ve got al-Qaeda on the run. It’s true that an arm’s length list of al-Qaeda leaders have been wiped out by American drones and stealth attacks by the Obama administration. The question is, is it enough that Operation “Linda Nchi” is the nail in the coffin, or just the positioning of another sacrificial lamb.

If the latter, Kenya will become rocked by terrorism for years and years. Unless it becomes the horribly ruthless, dictatorial regime of Ethiopia where you need permission to sneeze on the streets of Addis Ababa.

Kenya doesn’t understand — which America maybe finally does – that a ground war against terrorism won’t work.

Defense against terrorism is critical and can be successful. Diplomacy and sanctions against terrorists works. Stealth raids and maybe even drones to kill terrorists might even work, but war doesn’t work. Kenya was managing all of these things masterfully! Until last week.

My friends in tourism in Nairobi are near panic. Bookings are canceling in the droves. And no one in their right mind would suggest a foreign vacationer visit the country, now.

This is so damn sad. For so long Kenya tread the perfect balance with regards to its chaotic terrorist neighbor, Somalia. It refused to join African peacekeepers in Somalia. It tolerated but repelled incessant incursions into its Somalia border towns. And it quietly assisted the big guys by rounding up terrorists on its own soil.

But then the Somalia famine quadrupled the size of the refugee camp in Kenya at Dadaab to a third of a million people, in less than three months; the world economic collapse bludgeoned the shilling, and finally the

“We had to do something.”

The chant of the impatient and vanquished.