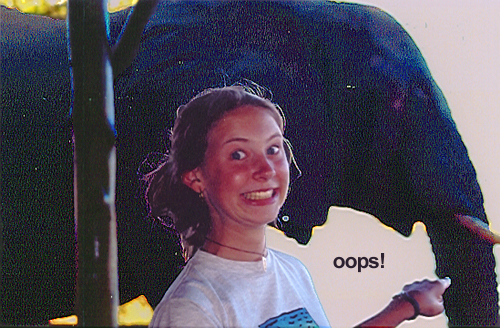 Have you ever heard about that little kitty that was taken far, far away and dropped in a forest but found its way back home? What about an elephant?

Last week the Kenya Wildlife Service completed the first of several phases of relocating 200 jumbos as much as 100 miles from where they were picked up. The controversial and very expensive project is one more attempt to “save” elephants by removing them from angry farmers, school children and people walking to church.

Well, we won’t know for a while. But … a couple don’t like their new diggs very well.

Two were killed in Kisii, a heavily populated city in exactly opposite direction from where they were relocated, and although they were “dispatched” by villagers before wildlife officials could identify them with certainty, there’s every indication they were from the relocated bunch.

Those ele would have walked about 50 miles through (human) enemy territory northwest having just been brought 50 miles southwest to the idyllic and peaceful human unpopulated Maasai Mara in the relocation effort. And frankly, whether they were from the relocated bunch or not, their journey from the nearest open reserve (the Mara) shows how capable they are of navigating human population centers.

And at the end of their journey you don’t hear cute little mews at your backdoor.

Pole pole I’m coming round to thinking ele must be culled. I’m not there yet, and I still viscerally resent the mostly southern African theory of “carrying capacity” and that anything that doesn’t meet the model should be eliminated.

(Not just ele, by the way, but Jacaranda trees, certain flies and spots on windows.)

But the situation in East Africa is growing intolerable, and intolerably expensive. KWS has moved the first 50 tuskers at an expense of about $3,000 per elephant.

All sorts of things are being desperately tried now to control this human/elephant conflict, from pepper spray, to scare crows, to moats and bullhorns.

The most effective way is already being used in southern Africa (where they don’t need it as much, because they kill their excess!). The seel-reenforced concrete spike barriers employed in Botswana around its national parks tourist camps work well. The problem is they are extremely expensive, too. Each roughly 4′ x 4′ block costs around $10.

That’s the cost in South Africa. First there would have to be a factory built to produce them in East Africa, or the additional cost of importing them to East Africa.

To surround the northern top cap of the Maasai Mara (the southern border sits on the Serengeti) you’d need more than a half million blocks and that doesn’t even take care of the many river boundaries where they wouldn’t work, the labor to do it, they maintenance and the possible environmental fallout of also impeding other wildlife.

And then, of course as the southern Africans would point out, what happens when the density of elephant is compressed to a level that starts to destroy the Mara ecosystem?

You see. The reason the ele are leaving their splendid protected reserves, is because there are too many of them already.

So any successful barrier or relocation effort could end up being counter-productive.

I won’t continue to the conclusion.