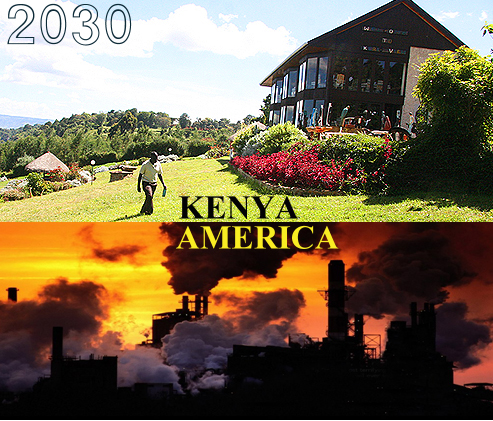 Japan. No-no. And certainly not the U.S. Our Cap & Trade legislation is dead. Republicans crushed it.

The answer is Kenya. Because environmentally aggressive government policies have spurned growth to record levels.

Shall I repeat that?

Little Kenya, whose GDP is skyrocketing, whose unemployment is at near record lows for a developing country, who is grappling with those ancient problems of inflation and too much demand for small business loans, and gridlock in city traffic – KENYA.

Because every era has drivers of the economy, and important ones right now are industries that peer into a future of no oil. (Even as – remarkable, this is — Kenya has just discovered relatively large amounts of oil!)

The draft Climate Change Bill 2010 is the first of its kind for any country in sub-Saharan Africa. Reading between the lines of the proposed legislation, Kenya’s business newspaper began its story today stating that the main purpose was to … stimulate the economy and provide business growth!

“The government has drafted a Bill to fight off the destructive effects of climate change, enabling investors to earn money from the global carbon market by engaging in projects that reduce emission of carbon dioxide.”

My Goodness. What a Novel Idea. How Quaint.

The bill was not just an edict from On High. It was the result of a working group created by the Government in April which was mostly composed of business leaders and advocates.

And try as I have, I haven’t been able to find a single professional, government or scientific voice in Africa that believes climate change must not be aggressively addressed by government legislation.

Africa is effected by climate change nearly as seriously as the islands floating away in the Pacific. Newly erratic and destructive rains and floods have immediate effect on its food source, the result of the ice caps melting too fast.

Africans believe that climate change can be slowed through active government legislation. But the government approach is more pragmatic, self-serving:

“We have been flooded with inquiries from financial institutions like HSBC Bank and JPMorgan, but we cannot engage them now until we have set rules and regulations,” Kenya’s Economic Secretary, Geoffrey Mwau told the African Business Review in that same article.

In fact, the International Financial Corporation, believes it can raise $100 million in private investment for Kenya’s projects.

All legislative initiatives at the federal level have been crushed by Republicans. Giant corporations are suing the State of California to stop implementation of its own climate change legislation.

Indeed, a ThinkProgress analysis found that 50 percent of the incoming freshman GOP class deny the existence of manmade climate change, while a shocking 86 percent are opposed to any legislation to address climate change that increases government revenue. Meanwhile, all of the Republicans vying to chair the House Energy Committee — which handles climate and energy issues — in the new Congress are climate change deniers. They include Rep. Joe Barton (R-TX), who infamously apologized to BP shortly after the company’s catastrophic oil spill in the Gulf of Mexico this summer.

I just wish sometimes that we lived in the age of StarTrek. That we could beam our leaders out of America and make them look down at the real universe to see what is happening in the Real World.

Kenya is not alone. It is America that is alone.