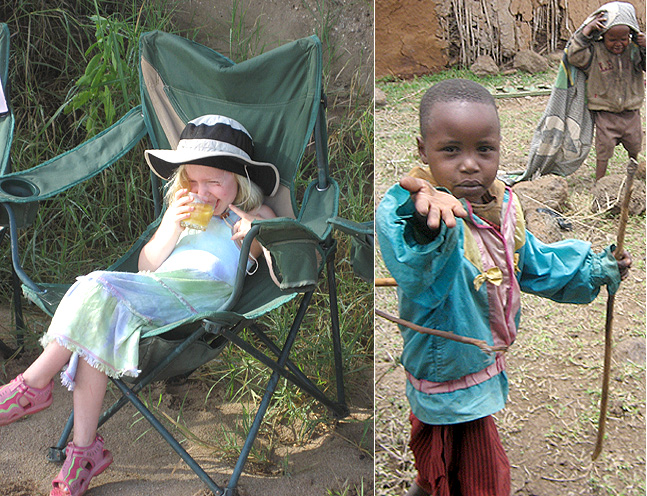 Tourists have always stood out in the Third World as eccentric, rich visitors. But until now they were neither resented or impugned. That may be changing.

Is it right that you as a tourist pay $1500 per day to stay at &Beyond Ngorongoro Crater Lodge when that is more than the average wage earned by a Tanzania in a year?

Sunday, a respected journalist in Kenya admitted that the publicity over Kate and William’s engagement tugs his “instinct to look at the dark side of acres and acres of land still reserved in the Kenyan countryside for the occasional pleasures of visiting monarchs and aristocrats, and the local privileged class.”

And while it’s a bit hard to tell from an email address if someone is white or black, I venture that the critical comments left after Otieno’s column were from white Kenyans and that the blacks were supportive or equivocal. More or less.

Until this year, tourism revenues in Kenya were constantly vying for the top foreign currency earnings with tea and coffee. But Kenya is growing rapidly, and manufacturing, mining and service industries look like they will all surpass tourism within just a few years.

Tourism is no longer the sacred cow it was for at least several generations.

Otieno used the publicity about Kate and William’s engagement as the vehicle to discuss the question: are the privileges given the tourist industry fair?

The royal proposal was made while the two were on holiday in Kenya.

I for one was glad to see Otieno’s column. He began politely enough but ultimately used his talent as a writer to make a very strong case. Otieno penned that “the future tribal king of the British” had stirred up a hornet’s nest in Kenya about privilege, land ownership and income inequality.

“I thought we particularly looked good out there on CNN where the local correspondent ably re-enacted a Jesus-born-in-a-manger scene complete with a muddy footpath and a humble cottage where the royal romance miraculously blossomed,” Otieno joked.

But the joke is right on. Christian charity? Christian fairness?

Do the west’s Christian values apply to the extraordinary tax breaks given &Beyond? To the ownership/management of fertile lands normally unavailable to foreigners? To the visa waivers for foreign managers to live and work in Tanzania?

The answers always used to be, Yes of course. Because the benefits to East Africa, mostly in terms of employment, were large enough. But the discrepancy has gotten bigger, not smaller, over the years.


Since &Beyond opened Crater Lodge in the late 1990s, the wealth of individual Kenyans has roughly doubled, impressive yes. But the price of Crater Lodge has increased 400%!

Now in fairness to &Beyond, not all that increase has been pocketed by its stakeholders. But in fairness to East Africans, neither is that increase justified by increased prices or taxes. The truth is somewhere in between, but it seems to me definitely skewed to Crater Lodge’s advantage.

And I think that’s what Otieno is basically referring to.

Honing in like a lasek laser Otieno writes the wealth of a foreign tourist “…symbolizes the kind of inequality and ostentation despised by a large section of the Kenyan society.”

This is only the beginning of the debate, but it’s important to expand, and the bitter voices of foreign managers that dominate the comments following Otieno’s blog are disturbing. That kind of vitriol is not going to help our “tourist cause” one iota.

It’s a real issue. Let’s deal with it.