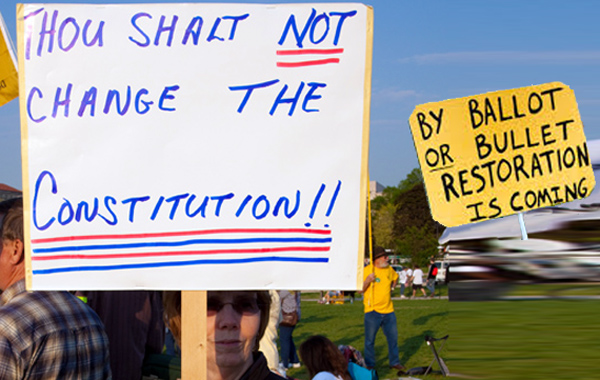 A “parliamentary driven democracy as opposed to presidential… is the only system which [can] shield the country from biased or unsuitable leaders.”

So ascribes Kenya’s current president together with his principal rival who were on opposite sides of the mini civil war of 2008. While America languishes in anguished reflection regarding what to do with something like Trump, Kenya has a plan. They intend to change their constitution.

So often in America, today, I hear the refrain, “Elections will decide.”

Right now Kenya has a presidential system like America.

“ In the modern age,” writes Kenyan Peter Kagwanja of the Africa Policy Institute, “ the American Constitution has become the emblem of a political order based on the assumed moral supremacy of … liberty, consent of the governed and equality before the law.”

But modern times have proved that untrue.

“Liberalism … is retreating, throwing democracy into its worst crisis ever.”

There are simply too many effective manipulators of the “one-man” to presume his action truly represents self-interest. Aggressive global politics, concentrations of huge sums of money and other forms of influence, and most of all, the results of biased and social media, all distort every person’s notion of their own self-interest.

So if you want to preserve democracy – perhaps for a more stable time – it must be limited. Executive systems of government concentrate too much power in too few people. If this power is legitimatized by a democratic system, there’s not enough institutional constraint on incompetence, criminality or outright evil.

As we are seeing so well right now in America.

As we are seeing so well right now in America.

Kenya’s constitution is hardly ten years old, born of an attempt after the turbulence of 2008 to avoid civil insurgency, again. But so much has happened so quickly in those ten years.

It’s a lot easier for Kenyans to acknowledge this and recognize that forcing coalitions by decentralizing power centers is a more nimble and effective form of governance than for Americans who ridiculously nostalgically cling to their ancient constitution.

It’s laughable to political elites in the emerging nations of the world how unrealistically Americans refuse to consider changing some of the institutions of their government.

And Mitch McConnell is fortifying every possible institution to protect it from change, starting most transparently with the ultimate decider, the courts.

Elections matter, but they don’t matter a fraction of what they legitimize, and in today’s world the Kenyans are on the right track while crazy Americans won’t even enter the starting gate!