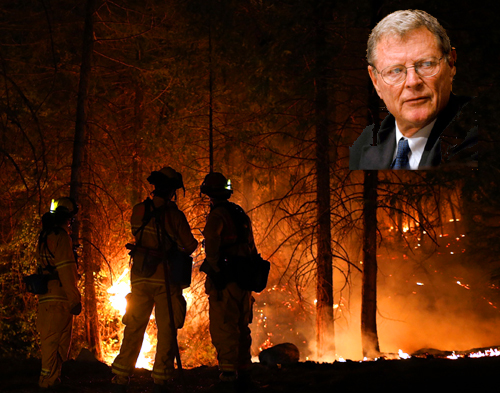 Global warming disrupts my landmark Cape/Botswana safari, but compared to what may happen a decade from now, I don’t think anyone will complain.

A 12,000-acre wildfire has closed one of the Cape’s most spectacular coastal highways and today threatens Table Mountain National Park.

These areas are not simply major tourist attractions, but arguably the most precious of the world’s six floristic kingdoms.

The Cape is about 35 degrees south longitude. So is much of Australia and South America. California is about the same, but north. All these coastal areas in their summers are experiencing record-breaking hot temperatures, high dry winds and … unprecedented fire.

“Unless there are rapid …reductions of greenhouse gas emissions …Australia will experience more heat waves and bush fires,” a climatology professor at the University of Melbourne has warned. 2014 and 2015 were the worst years for wildfires in Australia’s history.

The 2014 Chilean wildfires nearly destroyed the port city of Valparaiso.

The Brazilian government has warned of a 160% increase in wild fires as endless lines of flames destroy huge portions of the Amazon.

We all know what’s happening in California.

Light rain yesterday slowed the fire’s advance in The Cape and there’s hope that “heroic” (many volunteer) fire fighters will get control, today.

But the spectacular Chapman’s Peak drive into The Cape Peninsula from the city is closed, and it’s likely to remain closed long after the fires subside.

The destruction of the foliage on the steep cliffs that rise from Chapman’s is now compromised, and rock slides are more likely.

Chapman’s Peak is one of the main tourist attractions and in a very personal way it displays how global warming is lasting and destructive. Everyone remembers catastrophes in personal ways: Saturday 35,000 bicyclists convene at The Cape for the world’s largest timed marathon race. The route has been slashed to less than half its original 70 miles.

I remember the 1996 Yosemite Ackerson Fire which burned 60,000 acres and may actually now stand as one of the markers of global warming. But at the time it was rationalized as a necessary ecological event, just today as many in The Cape are viewing today’s fire. 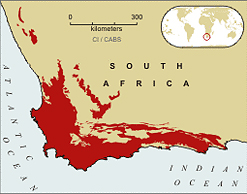 The Cape is arguably the most precious of the six floristic kingdoms on earth for little more reason than how small it is. The Ackerson fire was 60,000 acres large. This Cape fire is currently 12,000 acres, a fifth the size of the Yosemite catastrophe.

But Yosemite sits in the world’s largest floristic kingdom, the boreal. The fire was infinitesimal over that immense area.

The Cape’s precious floristic kingdom is less than 800,000 acres large and this fire could destroy almost two percent of that kingdom, an area with a remarkable 8,700 species of plants of which two-thirds are endemic. This rivals the Amazon’s biodiversity and dwarfs the boreal biomes in which Yosemite is found.

A good friend here told me yesterday that “we’re just going to have to learn to live with this” as she repeated the mantra of the importance of fire in rejuvenating plant species.

It’s true that the fynbos biome requires fires more often to remain healthy than the great pines of Yosemite. Most scientists think the optimum for any fynbos plant is 7 years.

But I disagree substantially with my friend’s shrugging off this occurrence. When understood globally we begin to see how sinister global warming has become.

This Cape fire is not a singular event. It’s part of the longitudinal band we can now clearly call the planet’s “Ring of Fire.”

Caused by global warming, increasing fires reduce the plants that produce our oxygen while the actual combustion contributes to increased greenhouse gases. This is precisely the exponential advance that scientist have been warning us about for years.

Yes, heroes should be applauded and firefighters are among the most laudable. But it’s time, folks, to start focusing on the villains.

And among the most notorious of today’s villains are the climate change deniers like our own Senator Inhofe who now chairs the American Senate’s most important environmental committee.

Can you believe that? But I doubt Senator Inhofe even knows what a floristic kingdom is. His cronies in Kansas and Texas have been doing everything in their power to eradicate such nonsense from the public school textbooks.