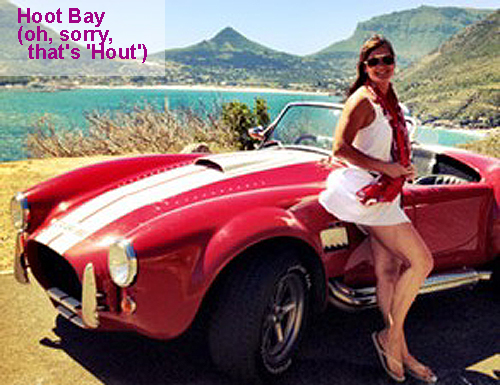 I transferred to my hotel in Sandton last night in a brand new Mercedes Benz, but the driver/owner kept turning the engine off at stoplights to save gas.

That’s South Africa in a nutshell: a veneer of luxury … but a base still struggling to become middle class.

In incredible contrast to the rest of the entire continent, including relative power houses like Nigeria and Egypt and Morocco, there is nothing in South Africa you as a visitor can’t get. Everything from organic kosher milk to a heart transplant, from the newest model Mercedes to the highest tech call center in the world.

Diamonds are a luxury that no one needs, and gold too was nothing but a luxury when first discovered. South Africa has been the world’s primary provider for more than a century. I believe this dependency on the world’s lust for luxury has bored itself into the local South African’s psyche.

If there was ever a top-down economic model, the intractable belief that prosperity trickles down, it’s here.

We’re rapidly coming to the conclusion in the U.S. that trickle-down economics doesn’t work. We – America – the bastion of capitalism is admitting our economic success was not from the flash-in-the-pan headlining Rockefellers, but from the mom-and-pop entrepreneurs who never really make it big, except in the aggregate numbers of them.

Cars reflects that. Long before a little business needs a Madison Avenue PR consultant or Washington lobbyist, it needs a car.

The old adage in the States that as goes GM so goes the economy might be lately displaced by “so goes Apple,” but that’s stepping a bit too far into the future when discussing economies like South Africa that are still trying to develop a sustainable middle class.

That isn’t to deny that every peasant needs a mobile phone. But even Ubuntu – which will long outsell Apple in Africa – is too expensive for many South Africans, today. The sheer number of mobile phone sales in South Africa is an undeniably important and hopeful part of its economy.

But ‘cars’ is driving it this minute. 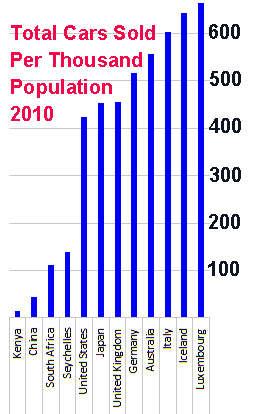 The automotive industry contributes nearly 6% of South Africa’s GDP and is the third largest sector in the South African economy after mining and banking, accounting for 29% of the country’s manufacturing output.

Mining and banking are not driven by South Africa’s minions, but by global forces associated to the lust for luxury.

Cars are driven by the South Africa’s minions and it’s substantial.

All the major car manufacturers have plants or shared plants in South Africa. Between a half million and three-quarters million cars are sold annually here. (Ford is the top manufacturer and seller in the country.)

Of the roughly 190 countries reporting in 2010, South Africa was 68th in the world for the number of vehicles sold per thousand persons.

The U.S. was 32nd. Seychelles was actually the African country with the most sales, but the Seychelles has so few people and is such an anomalously rich place for Africa, I don’t think it really counts.

South Africa is the king in Africa, and actually among most countries just below the level of development reflected in the United States.

(Brazil did not report in 2010. Based on a range of years around that, though, Brazil would be the leader in South America and would rival South Africa’s world ranking.)

South Africa stands out as well for an exporter of cars. Toyota’s Hilux truck or pickup, Mercedes Benz’ C220, and Volkswagon’s Polo are the top exporters, respectively. They represent a huge range of car types, from super luxury, to work vehicles to economic vehicles.

So what does this all mean? South Africa is a major consumer and producer of cars globally, from all styles and needs. But many of the owners, like the guy who transferred me to the hotel last night, really pinch their pennies.

Luxury drives visitors to South Africa, and it’s a reasonable presumption that they will appreciate being transferred in a luxury vehicle to the nearest diamond seller.

But the man driving them still lives hand-to-mouth. Though South Africans might cherish thinking otherwise, it’s not going to trickle down.