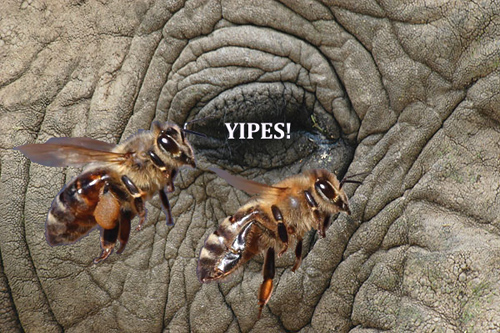 All we had to do is remember Dumbo jumping away in terror from Mickey Mouse. Instead we spent millions digging earthen moats, sprayed juiced pepper along firebreaks of hay, and I proudly discovered meter squares of steel reenforced spiked concrete. All we needed was a bee!

Five years of research has culminated with a global prize to a young British scientist who has proved how easy it is to keep elephants away from .. well, farmland, schools, roads, in fact anything you want!

Lucy King and Save the Elephants resurrected years old research about how terrified elephants are of bees. Then she intricately studied the sounds bees make, proved that was what sent the elephants fleeing, then combined a productive deterrent with a productive agricultural product and bingo, no eles and lots of honey!

Long before King’s research it was common knowledge that eles flee bees. This upper brain memory in Africa is just like our Walt Disney knowledge of how scared they are of mice. Nice cartoon but .. so what? In fact, it was hard to believe and original science to study it seemed fanciful.

But good science doesn’t mind being embarrassed, and King’s and other’s earlier research showed that particularly in times of drought bees cluster around elephant’s eyes and up their trunks, because of the moisture there. People don’t realize that bees need as much water as pollen to make honey.

King’s research was the culmination of many individual research projects over the last five years, and was awarded the coveted “Thesis Prize” by the Convention on Migratory Species at the annual meeting in Norway.

“Her research underlines how working with, rather than against, nature can provide humanity with many of the solutions to the challenges countries and communities face,” said Achim Steiner, executive director of the UN Environment Programme (UNEP).

“Dr King’s work spotlights an intelligent solution to an age-old challenge, while providing further confirmation of the importance of bees to people and a really clever way of conserving the world’s largest land animal for current and future generations.”

King was born in Africa and personally aware of the skyrocketing human/elephant conflict in part an unintended consequence of saving elephants from near extinction. Her work began at Oxford University and the bee studies were her Ph.D. thesis.

It ended in northern Kenya where once all the details of a “bee fence” were engineered, a control study of 34 Turkana villages in a new agricultural area on an elephant migratory route were carefully monitored for elephant incidents.

Originally King and other scientists thought their job had ended a few years ago when they proved that 90% of elephants will flee certain types of bee sounds, mostly those created by the buzzing wings. This sound in turn provokes a very specific elephant alarm call that is not only the sound of a terrified beast running away, but specific enough to cause other elephants in the area to flee as well.

Clearly reproducing the sound was all that was needed. And while that’s technologically easy, it can be expensive and requires maintenance like all fire alarms. Particularly far out in the bush where electricity is erratic.

Boing. Why not do it from the beginning?

Villages now have the added benefit of lots of honey, and the specially engineered beehives designed to increase the longevity of the hive and production of honey are far less expensive and much more durable than electronic sound systems.

Despite all the excitement this isn’t the BEE-all or end-all of elephant deterrents. During periods of drought – which are chronic in elephant land – honey bee populations dive. It might be true that eles get stung more, then, but they also get much less warning since there are far fewer bees making the sounds that scare them away.

So during these frequent periods of low rain bee hive fences lose some of their mojo. King has explained in her research that bees are just one – if the most potent – weapon in a necessary arsenal of elephant deterrence.

Nevertheless, it is clearly the best one so far, and may in fact have a greater application in parts of the world like Asia where human/elephant conflicts are also growing and drought is much less a problem.