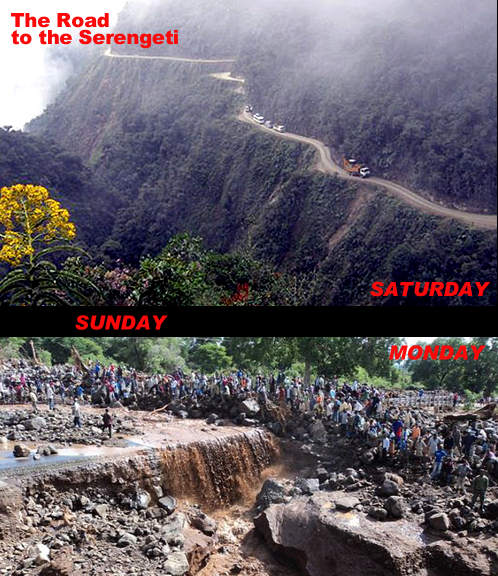 When something goes wrong, those with greater resources cope better. So it’s no surprise that Africans are the furious ones and the developed world’s citizens are the most complacent about climate change. Too bad rich tourists heading on safari: you’re about to experience it square on.

I think practically everyone in the world will agree on one climate change outcome: weather is more extreme. Summers are hotter, winters are colder, winds are stronger, rains are heavier, and periods of beautiful calm are often longer. Extremes.

In Tanzania last weekend heavy rains fell once again in the north over the important safari circuit. Three bridges were destroyed, the beautiful Manyara escarpment lost much in a landslide, Serena Manyara Lodge was partially destroyed, a half dozen people were killed and hundreds hurt, and right now you can’t drive normally into the Serengeti from any airport in northern Tanzania.

The rains have laid waste a beautiful paved road – the only one – that links Tanzania’s Manyara, Ngorongoro and Serengeti national parks with the main metropolis of Arusha and Tanzania’s main northern airport. The road was built with Japanese aid money in 2007, completing an already improved gravel road built in 2003.

Before then overland safaris into the Serengeti were much different than they were post last weekend. Either you flew, missing so many beautiful sights along the way, or added a day or two to your itinerary to make sure you could get over the Manyara escarpment.

It’s unclear if Tanzania has the wherewithal today to repair the current mess, which is massive. The very important December holiday season is extremely heavily booked, and I doubt seriously that the roads can be repaired by then. And the greater question looms: you repair it at phenomenal cost, now, and then what about the next heavy rains?

And the all but dead Kyoto Protocol, which the world’s top polluters the U.S. and China never signed, may get its nail-in-the-coffin as reports circulate that Canada will celebrate the current conference by withdrawing from the treaty.

Africa can’t cope. And when Africa doesn’t cope big time, the developed world is pulled into the mess as rescuer of last resort at great expense. This is getting boring, it’s happening so often, and nobody seems to have a long enough vision to realize ultimately that the world as a whole – that means us – is hurt by climate change as much if not more than Wall Street banks and housing bubbles.