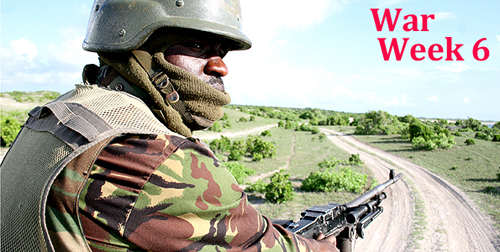 Very little of anything happened last week with Kenya’s invasion of Somalia. Some are beginning to see it as an occupation rather than a specific campaign. Kenyan forces continue to decline engaging al-Shabaab in their fortified towns of Afmadow and Kisamyo.

Kenyans at home who have until now been unwavering in their support are beginning to falter: “In the wake of Operation Linda Nchi, there has been anxiety that there is little action in Somalia… If you are excited by war, the one in Somalia has been disappointing,” a leading Kenyan journalist wrote Sunday.

The 5th week of the war included a flurry of diplomatic activity as well as the invasion of Somali by Ethiopia. I had thought these both positive developments. But many African analysts see it differently.

Tanzanian Evarist Kagaruki of Dar’s main newspaper, The Citizen, claims “there are no signs yet to show that support for Kenya was forthcoming. The whole burden has been left to the Kenyan army [and African Union troops that have been there for a number of years as peacekeepers].”

Kagaruki concludes that the Ethiopian invasion won’t help the Kenyan effort, either. He says that “Ethiopia is not the right “partner” in the adventure” because Somali/Ethiopian enmity is centuries deep. He points out that it was in the wake of the last Ethiopian invasion that al-Shabaab gained so much power.

“It is time Kenya wrapped up the campaign before war fatigue sets in,” was the lead editorial in Sunday’s East African newspaper.

But the military insists the campaign is going as planned. Apparently siege rather that engagement is that plan. Friday military commanders claimed that the last five ships that were at the port of Kismayo had departed, and that the Kenyan air force and Navy would now not allow any others to enter.

There have been no more terrorist or revenge attacks in Nairobi, but that isn’t true near the Somali/Kenya border, where multiple attacks and skirmishes have left a number of civilian casualties.

This is clear evidence of the strategy al-Shabaab is employing, a guerilla campaign that is quite content to withdraw from the line of battle into the bushes and hills.

And while increased security in Nairobi and Kenya’s main cities may being helped by many arrests of suspected al-Shabaab sympathizers, the military nature of their detainment is not going over well with the Kenyan population, and certainly not with the hundreds of thousands of ethnic Somali living in Nairobi.

So last week’s glimmer of hopeful excitement is gone.