by Conor Godfrey
I’ve been accused of being a relentless Africa booster… this is almost certainly true. 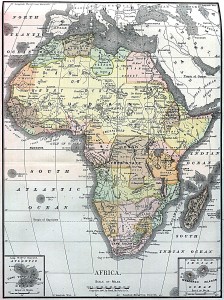 To fight back, however, I am going to offer a scarier version of the continent’s next thirty years that has taken up serious mind share recently.

This idea will hopefully pass muster as a research topic, so I would certainly appreciate your feedback as I am just getting the full proposal together now.

From the late 90s to the present, we have seen tremendous agitation around African intra and inter-state borders.

I would argue that this started with the Ethiopia Eritrea war (1998-2000) and would include the escalation of civilizational conflict inside Nigeria and Mali, the 2006 Ethiopian and the 2012 Kenyan invasions of Somalia, and, of course, the separation of Sudan and South Sudan.

Dozens of conflicts—including many in the DRC—do not make this list because they did or do not fundamentally challenge the status-quo colonial borders.

You can quibble with or add to my list – that is not the point.

Before this decade the Colonial borders exhibited nigh unprecedented durability. Here is a list of African border changes post WW1… 90% of them were trades between colonial powers.

My point (or wild hypothesis if you will) is this… from independence to 2000, most African states did not possess the material capabilities to mount a sustained challenge to the territorial status quo; doing so requires states to centralize political control, neutralize domestic opponents that pose a threat to the state, and have the material resources necessary to take, hold, and administer territory.

As the U.S. knows well, this requires lots and lots of money (not to mention a professional military and a tolerant domestic audience).

For this entire period, states concentrated on papering over the inconsistencies built into their illogical creations, and, if hostile foreign action were required, they relied on cheap and effective proxy militias and other irregular activity rather than large-scale mobilization.

The Council on Foreign relations writes —not totally persuasively in my opinion—that keeping colonial borders gave African leaders “reciprocal insurance” against invasion, and that leaders were more concerned with arguing over who controlled state resources than fighting over borders.

So why are things coming apart at the seams (pun very much intended)?

This could, after all, just be a blip, a decade long aberration on an otherwise century long consolidation along the lines drawn on a cocktail napkin in Europe.

Here is what I think:

1) Differential Growth: The continent is booming, but not everywhere feels the love.

As some countries outpace their neighbors they will be tempted to acquire the military capabilities to favorably alter the territorial status quo.

Colonialism left hundreds of potential territorial flash points, and for the first time since independence, some African states can likely do something about them.

This narrative plays itself out most visibly today in Mali, Nigeria, and Cote d’Ivoire, and to a lesser extent in Kenya and Uganda.

2) Resources: As mentioned in this post, Africa is massively under prospected and companies are racing to catch up.

A powerful country may have let unfavorable borders lie when no rents could be extracted from the disputed territory, but what happens when billions of dollars of oil and gas hang on a few lousy kilometers, and investing in a miniscule navy would be sufficient to enforce a fait accompli on the border?

There are a number of possible mitigating factors—colonial withdrawal, regional integration, economic integration, etc… — but I will save those for some future post.