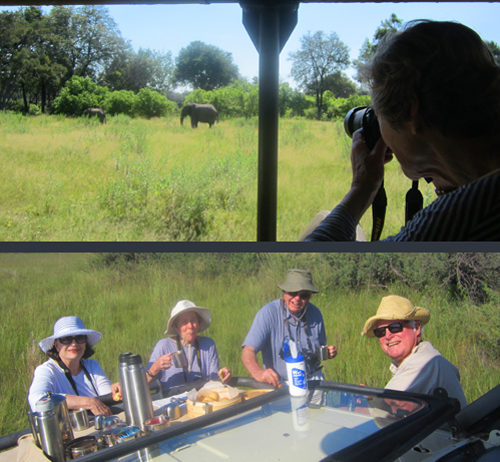 On the drive from Chief’s Camp airstrip we saw elephant, kudu, hyaena, impala and giraffe. That took about 30 minutes. The Okavango Delta at this time of year is truly magnificent!

The veld is beautiful right now. Everything is lush and green. It’s a bit late for the blooming trees and flowers, although I did see one acacia still flowering and a beautiful wild iris of the most delicate pink color seen from time to time throughout our drives.

The juvenile carmine bee-eaters are just getting their full color, and the migrants – like the yellow-billed stork – are still here in large numbers, so to a certain extent we’ve got the best of both seasons as far as birding goes.

It’s the end of the Delta’s summer, temperatures today began in the mid 70s and would rise throughout the day to nothing more than the upper 80s. A huge cold front has moved into the southern part of the continent, so we were lucky. But even without this front, it would hardly be ten degrees higher.

The highlight for me on the morning drive was seeing a pair of wattled cranes. These magnificent birds were almost extinct less than a decade ago, and according to the Wattled Crane Rescue Foundation there are now 235 in South Africa. (There are no good number estimates for Botswana, but I imagine it’s higher.) 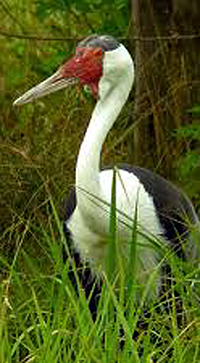 The crane was challenged by what challenges most of Africa’s wildlife, today, growing human settlements, and in particular, power lines. Baby wattled cranes fly up to six weeks before they can walk, so if knocked out of the sky on their juvenile flights, they’re often doomed.

Like whooping cranes and California condors saving the crane fell to a consortium of private groups which raised the funds and enthusiasm for a sustained recovery effort that began with collecting eggs and raising chicks in safe facilities for later reintroduction.

Fortunately, normal behavior of the crane is to lay two eggs but to raise only one chick, so pilfering the nest of a single egg had little impact on the status quo.

Always a highlight is the incredible numbers of elephant, everywhere. Today we encountered 20-30 on the drive of all ages, and several groups of large males. During lunch at Chief’s Camp everyone was treated to 24 elephant in two families and a male following at some distance.

They moved into the swamp behind camp and found a channel where they watered and played, and then a secondary mud hole where the young especially spent a long time rolling and playing. It was an extraordinary course to an otherwise exceptional meal!