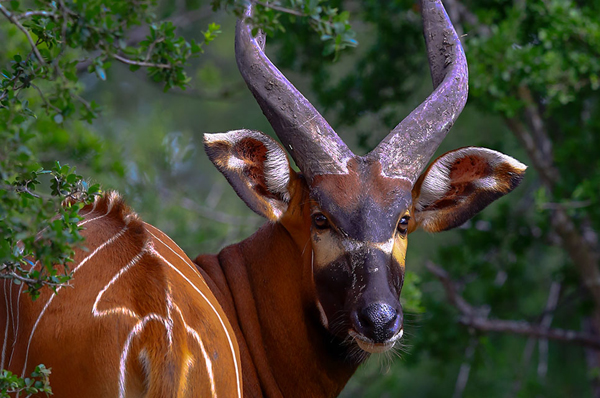 If there was no animal library for Lion King and Disney had to make them all up, the mountain bongo would be the first created.

Larger than a deer, it’s as cuddly as a panda. Huge spherical eyes drip with love. It walks delicately through deep forests like a water thrush, its wiggly nose forever sniffing flowers. But what puts it on the ToysRUs shelf is its gorgeous thick chestnut coat with pure white stripes like icing over candy.

When I was a young safari guide, we almost always saw bongos. Today they’re all but extinct, but! The news at the moment is exceptionally good!

A few months ago another baby mountain bongo was born at the Mt. Kenya Wildlife Conservancy, and three of the clients I was guiding saw him!

Best estimates are that there are less than 100 mountain bongo still in the wild, but there are now nearly that number in breeding programs in Kenya, and one is being reintroduced into the wild almost monthly.

One of the principle, advertised attractions of a 1980s Kenyan Safari was the likelihood of seeing a mountain bongo in the wild. We usually accomplished this at one of Kenya’s three “tree hotels,” safari lodges built on stilts over natural salt licks and water holes high in the Mt. Kenya/Aberdare forests.

My favorite was, and still is, The Ark. I still go there about once a year, and I rifle through the ranger’s log to prove, that yes, bongo are seen more and more. Last year, for example, they saw bongo a dozen times.

But in the early days we saw them almost every night. Nightfall is the same year round on the equator, right around 630p. Then everyone is having sundowners in the bar just before dinner as the great floodlights which don’t seem to disturb the wildlife blast over the water hole.

The big game – including the bongo – by the way doesn’t come to the water hole to drink. They come to eat salt. These natural high altitude run-off ponds are little craters in the mountains. They catch all the water, and then it evaporates, and as this happens again and again lots of salt is left at the edges of the pond.

All wildlife except predators must forage for salt. (Predators get salt from the blood of their prey.)

So into the wee hours every night, with bleary eyed, excited tourists at three different levels and even through an underground tunnel right up to the water hole’s edge, big game was watched.

Every first timer couldn’t understand why all those elephants were eating mud balls! Well, of course, they weren’t just ordinary mud balls, they were very highly salted mud balls!

And usually, well maybe twice every three visits, in the quietest hours of the middle of the night’s morning, the bongo would come to lick salt.

The elephants had long since left having cratered the water hole. The buffalo had stopped snorting at one another, crossed their legs and hunkered down to chew their cud. The hyaena had grown weary of an endless night of foraging and disappeared into the trees. Even the bulbous giant forest hog with their little babies – one of the shyest creatures on earth – had come and gone as the breezes ended, the night stilled and most everyone else had gone to sleep.

Everyone bolted up in their beds as the “Animal Buzzers” placed strategically beside your pillow’s edge shook through the whole tree hotel.

Most people were wearing poorly clad pajamas but everyone raced to their nearest viewing platform or tunnel or level and cameras started to roll and there was a noticeable murmur as everyone tried to reduce their vocalized enthusiasm because, look George she whispered, not just one of the rarest but prettiest creatures on earth!

Then the bongo started to disappear. Big game hunters, mostly from the west, did them in big time in the 1980s. Then the habitats started to shrink and lots of animals – not just the bongo – got squeezed. Some like the leopard figured it out. Many like the elephant learned to live in tundras and deserts, but the bongo just couldn’t. Its home is a narrow high altitude ban with very specific plants for food.

Is the bongo really back? I’m sure on one of my next visits to The Ark I’ll see it. I’m sure. Nothing retrieves the past or preserves the future as marvelously as stark, quiet beauty. Fingers crossed. I’ll let you know.