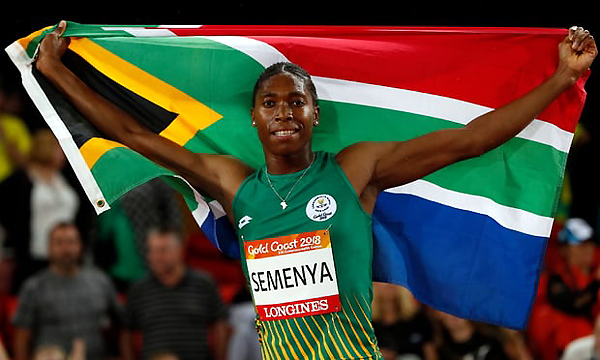 Man or Woman? South Africa’s Caster Semenya was the world’s best, all-time middle-distance woman runner… until last week when global sports authorities announced they would reverse her many wins and ban her from future competition because of her hyperandrogenism.

The proposed action drew immediate and strong protests from such running powerhouses as Canada much less South Africa, opening the ultimate can of sports worms: what constitutes gender?

Ms. Semenya’s multiple Olympic and other global running victories were augmented several weeks ago when she broke the 1500m at the Commonwealth Games at 4:00.71. The prospect of crashing the 4-minute barrier would place her in an universe of men only. (The men’s record is 3:26.00.)

Semenya has always been transparent about her hyperandrogenism which effects up to ten percent of women worldwide. This is an unusual genetic condition that triggers a high level of male hormone production like testosterone not normally present in women.

The vast majority of cases effecting women are quite debilitating, including the single most feared disease, Polycystic Ovary Syndrome Outcome. The proscribed therapy for a woman diagnosed with the disorder is immediate and aggressive treatment to suppress the male hormones. Until recently, that is.

Recently individuals like Semenya flipped the medical profession off its narrow buns by turning the debilitating disease into an unbelievable modern success.

Semenya in particular did this by developing rather than suppressing the natural outcomes of higher levels of male hormones. She built up muscles, for one thing, that could make her go fast.

She’s not using steroids or any other drugs — she’s drug free. She’s using weights and tracks and coaches and her god-given natural body.

There is little question that Semenya is one of the healthiest women in the world. That she may have jeopardized her reproductive future or altered a normal sexual life seems incidental now that she is widely accepted as one of the most successful women athletes ever.

The genetic condition is nowhere near sufficient enough to even bring into question the legal definitions of gender. Even the IAAF – the global running authority that made the announcement – concedes this.

Their faulty argument is that her genetic disease gives her unfair advantage. This is essentially the same as suggesting that genetics gives unfair advantage. That’s always been true and is part and parcel to the way any organism survives and prospers.

Clearly, we’re not fully apprised of all the physiological nuances of the human body. Every day we learn of new ones. It’s common understanding that non-white men seem to have certain starting physical advantages that can be linked to genes, and what Pete Carroll considers luck, Bill Belichick will call a disease.

That doesn’t mean that Russell Wilson should be banned for chromosome 145-A.3 or inversely that Tom Brady’s lack of 145-A.3 qualifies him to play.

(Nor does it mean that a remedy for Wilson vs. Brady gives a pass to anyone who secretly deflates a football.)

The story of Caster Semenya should be one of the most inspiring and uplifting of our times. While legions of western suburban Moms battle hyperandrogenism, its depression, obesity, diabetes and countless other ailments with buckets of drugs, Ms. Semenya has accepted the natural condition of her body and refined it to an art.

But as often happens with so much of the world, today, the governors are men. Constantly worried that their own testosterone is failing, they don’t appear sympathetic to a woman bettering them in that.