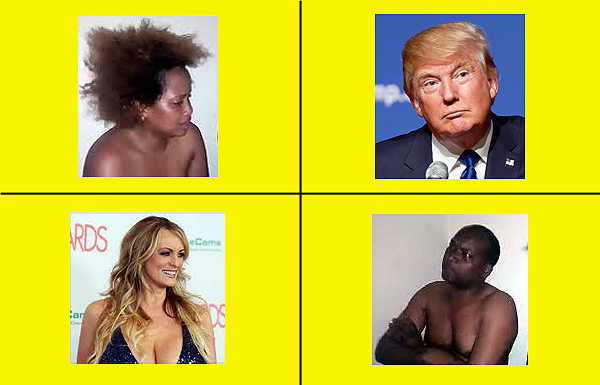 Infidelity, sexual deviance and pornography are now all OK, and this is as monumental a cultural change as gender rights. American-led it is spreading across the world. Example which follows is Kenya.

The acceptance of what only a few years ago was considered immoral and unethical is aggressively rationalized by churches, especially evangelical ones as political necessity. Religion has unmasked its piety. If Jesus or Muhammad only knew.

Like closet gays, what was considered sexually deviant behavior always achieved various levels of acceptance depending upon where you were and who you were. As your power in society grew, tolerance of your aberrant social behavior also grew.

So it’s likely there were more powerful men and women in history with aberrant social behaviors than less.

Yet at the same time vigorous cultural conservatism tried to cap this behavior. It was led by churches and public institutions like schools. Everything from corporate by-laws to state constitutions reinforced ideals opposing aberrant social behaviors.

That clear hypocrisy could not possibly withstand the information age and it came tumbling down with Trump. It’s now crumbling across the rest of the world.

Last week a powerful politician in Kenya was exposed (on YouTube) having an extra marital affair. A couple blinks ago the very accusation that such a politician was playing around would have ended the career of a Kenyan in these deeply Christian areas.

Peter Ndambiri, the Deputy Governor of a deeply Christian province near Mt. Kenya, was caught last week butt naked in a video having a sexual affair with a married woman. The video went viral and so consumed Kenyan society that the Kenyan government has been using every technological trick to block it being continually circulated.

The young, dashing, up-and-coming politician from the ruling party immediately claimed he was being extorted, and indeed that may be true.

What is so fascinating, though, is how he apparently will get a pass. A few blinks ago, no Kenyan politician would have survived this.

First, speaking before his church congregation Ndambiri claimed he was victim to super-human powers:

“The devil had been defeated and the devil will not succeed.” His wife then joined him and absolved him of any responsibility.

Later other pious politicians and church goers used the same reasoning to absolve him.

The man’s getting a pass.

He’s getting a pass for the same reason that Trump’s getting a pass. Both could likely be reelected as leaders of societies that for my entire life time and quite a few before that vended moral rectitude as a necessary first step to becoming an accepted leader.

The moral compass is rapidly losing any superintendence by sexual behavior. Perhaps that’s as it should be; perhaps not. Right now public attention focuses not so much on this loss of sexual behavior as a rein on power, as on the rectitude of denying or admitting it. But that won’t last.

Worldwide, what will last is the absence of sexual behavior as a factor in individuals achieving and exercising power. It started here. It’s now everywhere.