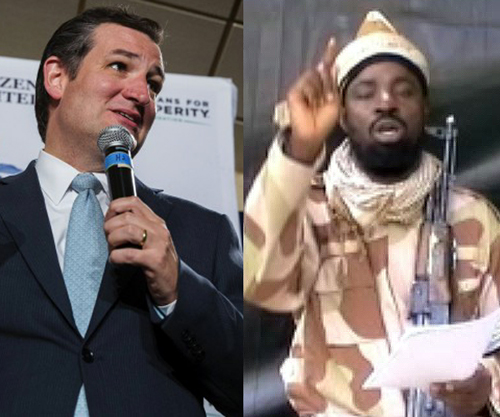 Boko Haram and America’s T-Party have a lot in common, and neither will disappear until their adversaries adopt some of their moral pinnings.

Boko Haram is on the rise. For more than a decade it’s caused widespread death and destruction in Nigeria, but with its new found fame, it’s expanding into a neighboring country.

“Right now, we are being infiltrated by Boko Haram,” a colonel in the Cameroon army told an Africa-wide press service last week.

Some argue they are “on the run” from northern Nigeria, their stronghold for more than a decade. Others, including myself, believe they’ve been strengthened by their recent worldwide attention.

The group continues to hold nearly 300 kidnapped schoolgirls from northern Nigeria. Many of the world’s western powers are helping Nigeria try to find the girls and eradicate the organization ever since the world’s media locked onto the story.

Like all politics in the west, Boko Haram has become entertainment:

The world press went ape yesterday announcing that primitive African tribes were now “on the hunt” for Boko Haram.

An extremely articulate, gentle and soft-spoken Boko Haram killer in a scarf-wrapped face was the centerpiece of last night’s CBS evening news.

“Boko Haram’s attacks … should be understood as part of an ongoing political-military campaign …to purge, conclusively, Nigeria’s Northern Muslim society of the source of its culture of corruption, decay and mismanagement,” says a Nigerian expert from King’s College, London.

Boko Haram views kidnapping girls from a corrupt society and turning them into tendrils of antiquated Islam a noble feat. That’s because in most of Africa you have to stretch way back to antiquated Islamism to find societies that were not corrupt.

And those were the precolonial days spoken about so highly by most jihadists. Corruption began with colonialism. It’s never ended.

Corruption in all sorts of forms is the only treatise the T-Party can rationally expound. When it gets into specific issues and policies it becomes mired in intellectual bureaucracy. Purity is the key.

Rather the purity of those tenants is what is argued. And there is little argument that Africa today, Nigeria in particular, is corrupt.

As is America. Nigerian corruption might reach its apex in a High Court judge taking money from an oil company. American corruption is more likely the Koch brothers airing 10,000 TV ads lying about Obama’s citizenship.

Neither example is more corrupt than the other. It doesn’t matter that one might have a greater impact in its respective society than the other. They’re both corrupt and it isn’t effectiveness but nature that generates the violent opposition of the likes of Boko Haram or America’s T-Party.

More than a year ago the Atlantic ran an excellent piece arguing that Democrats will only achieve supremacy over the T-Party if they adopt some of the T-Party’s ways:

“It is time for Democrats finally to steal a move from the Republican’s playbook… a Tea Party for Reform,” Lawrence Lessig argued in that article.

Even before that, analogies were being made between the T-Party and Occupy Wall Street.

It’s a hard stake to drive into American or African politics, but it’s what we all need right now.