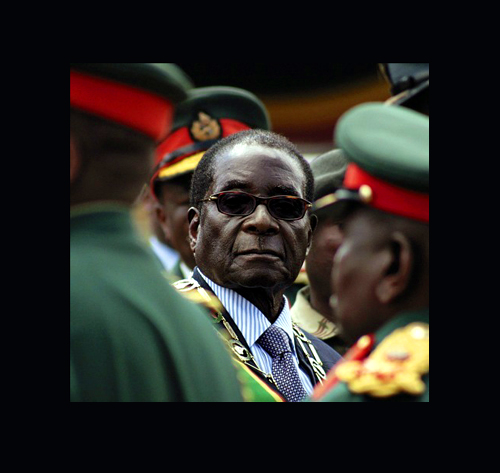 Ever heard of a coup d’etat that’s announced in advance? Ever been to Zimbabwe?

The Great Dictator, Robert Mugabe, was once again caught on video visiting a cancer hospital in Singapore several days ago.

His visit to Singapore is not entirely secret: spokesmen for the government conceded he’s in Singapore when he didn’t show up for several important functions in Harare.

But the government denied he’s visiting the Gleneagles Cancer Treatment Hospital to treat cancer. He’s there, they say, for an eye checkup.

It’s long been rumored that the 90+ year-old president has been battling prostate cancer.

Meanwhile, back on the ranch, a political rally was held announcing a coup could take place at any time:

“By the time he comes back from his so-called medical check-up in Singapore, we would have taken power,” a widely respected opposition activist told cheering crowds at a large rally Sunday in a poor neighborhood of Harare.

Well, it’s Thursday and they haven’t taken power and if Mugabe’s still alive he’ll be back, soon.

That, you see, is what’s wrong with Zimbabwe. The opposition is so feeble that it must resort to explaining what it could do, rather than what it does.

The populace cheers what it could do, but dares not support what it does, because the one statistic as large as the fraudulent election results used by Mugabe for his current validation as president, is the number of missing activists.

Those like Job Sikhala, the labor leader turned politician who spoke above, travel about in a ring of armed guards. The government turns the occasional blind eye so long as Sikhala uses only the future perfect tense.

Responding to the widely reported rally, a Zimbabwe government official dismissed Sikhala’s remarks as “coming from a political party that is seeking relevancy.”

Relevancy. Every time I think of Zimbabwe and Mugabe I just can’t understand how the people there have facilitated his dictatorship for so long.

Thirty years ago when Mugabe was just consolidating his power, the average Zimbabwean was far better educated, independent, entrepreneurial than the vast majority of their counterparts throughout black Africa to their north.

What happened? Why did they cave so completely?

We know some of the answers: many fled. While there was a white brain drain going on in South Africa the last ten years of apartheid, there was a black brain drain growing in Zimbabwe as the 1990s approached.

This was because the constitution forced on Mugabe by Britain and the U.S. guaranteed a white veto of any government action during the first ten years of Mugabe’s reign, from 1980 to 1990, even though whites were less than sixteenth of the population.

That was a mistake and the better off, better educated black Zimbabweans knew this. They had ten years to make their plans to depart, and tens of thousands did.

The second reason is that from the getgo South Africa has buffered Zimbabwe from international pressures to reform. This is because in the 1990s South Africa began to experience a huge flood of refugees from Zimbabwe, and they continue to do everything to stem the tide.

But even so the man who wears dark sunglasses even in the movie theater and his regime is so repressive if not retrogressive I remain highly perplexed.

So perplexed I couldn’t even be surprised if the preannounced coup happened.