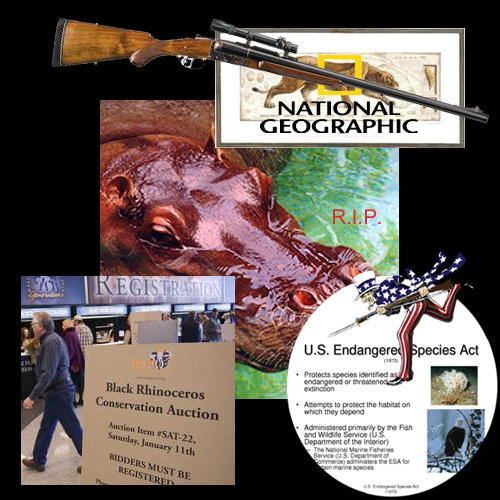 Texas hunters, National Geographic, President Obama and one old hippo in the Cleveland Zoo .. My gosh, what a ‘tail to tale!’

By now you must have heard about the Dallas Safari Club’s auctioning off
a “black rhino hunt” in Namibia that fetched $350,000 … for black rhino conservation.

I just don’t get what all the fuss is suddenly about. This isn’t the first time. The exact situation happened before and the Obama administration even blessed it. No problem then. Why so much attention, now?

Do you know how wonderful the Redwood smells? I think we should start a campaign now on MoveOn to auction off a few trees from Muir Woods and then donate the proceeds to Redwood conservation.

And I think we can just keep the ball rolling, then. Based on personal experience, I’ve also always felt that if you just get rid of a few of us old farts now rather than wait for us to keel over, society would be so much more attractive!

We have entered, truly, the world of the absurd: Kill it to save it.

Yet it isn’t the first time, folks! It’s not the second or tenth time, in fact. And such lofty characters as National Geographic and the Obama Administration have been fully invested in such ideas until now.

“Kill it to save it” is not a new concept. And it is the principle by which so much hunting – including in Africa – has been done for years and years.

Deer harvests are the most obvious example. Deer hunting has been a carefully regulated and nurtured social activity for six to seven generations, and today management of the deer population is a science extraordinaire. Were deer hunting to be summarily banned, there are plausible arguments that the entire population would crash.

And with a crash in one species, a panoply of similar and related species are jeopardized. Everything from their predators and scavengers (like wolves and crows) to the plants they consumer (like mustard garlic).

Of course it begs the question why hunting deer was ever nurtured then regulated in the first place. But that takes us well back into the 1800s and is such a lengthy period of human management of nature that the explanation is probably mute.

In Africa big game hunting, of which the black rhino was once an essential ingredient, was always regulated in a way that at least appeared to contribute to conservation.

Hunting reserves whether intentionally or by default surrounded the fully protected wilderness areas where no hunting was allowed. Those areas became known as the “buffers.”

Big game hunters in Africa are notoriously tyrannical. I have little doubt that when they lose their jobs they became commanders in blood diamond wars. So the “buffer” area around the national parks was policed in ways African governments could only hope could be the case inside the parks.

That protected the parks from poachers.

More to the point, people pay so much to kill a big African animal that the revenue stream into Africa was simply too much to refuse. This revenue stream was at least in part supposed to be used to nurture the fully protected parks.

This, in fact, is the argument used by Safari International. In October, though, CBC radio unmasked the real intention in a thoughtful interview of the safari auction’s lawyer. He admitted that the main reason hunters want to conserve anything is to be able to kill them, later.

Abe Lincoln once said something about being able to fool people but not always. Well, the public has been fooled for a very long time about hunting. You don’t kill something to save it.

In the current situation, the Dallas Safari Club’s most invoked second argument (after the first argument that the proceeds aid conservation) was that the rhino chosen was an old marauding male that was interfering with otherwise expected successful breeding in his community of wild rhinos.

Uncle Tom at a dashing 75 could charm the buttons off every prom girl in his community, and there were members of the family who wanted to bump him off, but we prevailed.

Don’t end this story, here. Remember that it was President Obama’s administration which was the first in the history of the Endangered Species Act and its worldwide equivalent, CITES, to issue a presidential waiver to a hunter
in Wisconsin to bring back a rhino he had killed in Namibia.

That hunter purchased his Namibian rhino hunt at a safari club auction.

The argument used by the administration was that the money the man had spent on the hunt would contribute to rhino conservation.

And more recently, National Geographic criticized attempts to “list lion” as endangered and thus stop all lion hunting, because according to this lofty magazine, hunting can contribute to conservation.

The Obama Administration’s action was abhorrent. NatGeo’s arguments were as thin as the Dallas Safari Club’s.

But it gets worse with NatGeo, because this time around they’ve criticized the Dallas auction. So add hypocrisy to abhorrence and you get absurdity.

So what do we do with old creatures no use anymore to procreation?

We do exactly what the Cleveland Zoo did for decades of agony to its budget. Yesterday, the oldest hippo in North America, Blackie, died at 59 years old.

Blackie was a pain. When I was first introduced to him he tried to attack me. Years later he just floated in an off-site enclosure that was built at great expense and tended to with the greatest care.

But he was alive. And zoos and real conservation organizations are interested in life.

The Dallas Safari Club, the Obama administration and NatGeo, seem to have more important priorities.