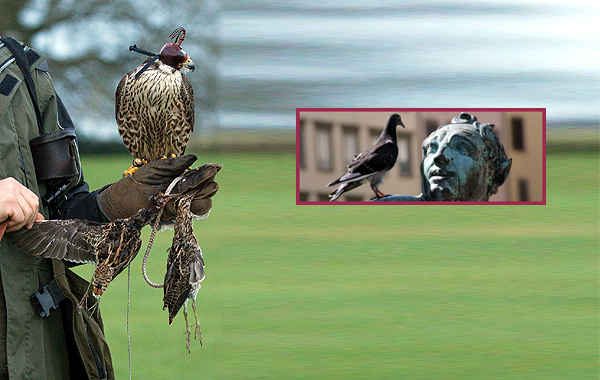 Sports that kill, and oh by the way eradiction of so-called invasive species, are hardly my cups of tea, but what do you think might soften my aversions? How about falconry clearing pigeons from monuments?

Falconry is an ancient sport usually associated with the deserts of the Mideast. I remember years ago while working in Kenya a reclusive, very shy American who established himself in a tiny mud hut at the edge of the desert training falcons for Saudi princes. We called him “Simon Ndege” (Ndege is “bird” in Swahili.)

Back then – thirty or more years ago – $25,000 for a pair of trained Kenyan peregrines was hardly chip change, but it was reported Simon finished the training for 2 to 3 birds every year. Great Arab princes would fly into Nairobi, spend the night at its casino, and in the morning charter a small plane to fly to the edge of the desert to buy their bird.

I watched Simon fly his trained birds numerous times and it was truly awesome. The Peregrine in particular diving from 400 feet at 250 mph is breath-taking! As with most falcons it is the impact with their prey that kills.

But falconry isn’t limited to the deserts of the Mideast. It was a sport cultivated even in Nordic countries in medieval times. The basic methods haven’t changed:

Birds have very little brains. Most of their behavior is hard wired but through patience and repetitive training the circuit can be changed.

A bird is captured usually young. The falconer swings “prey” at the end of a line which is enough to get the birds to hunt it. The “prey” is usually a mock-up, not real material, and the bird is then gently pulled back to the falconer where it then gets a real treat. The line with the prey becomes increasingly longer. The bird never shakes the instinct to hunt, even if the mock-up never changes. Ultimately the bird is untethered for its hunts. The perfectly trained bird will not consume the prey it kills, but returns to the falconer for its reward, and it loses the distinction between a mock-up and a real prey.

Falconry is a popular sport in The Cape of South Africa. The Cape traditionally had numerous birds of prey species all perfect for falconry. South Africa’s Karoo, or Mojave desert, is just north of The Cape and a perfect place for the sport.

Harris Hawks are the bird of choice in South Africa, but peregrines, various eagles and goshawks are used as well. The Falconry Society of South Africa is one of the most active sports groups in the area.

Raptor Rescue is an integral part of the sports association’s overall program. In The Cape this is done in conjunction with Eagle Encounters a not-for-profit in the Cape’s wine country that I always insist my groups visit, a rescue center for birds of prey.

Now the two organizations have teamed up to provide very successful pest control!

“Falcon Bird Pest Control” uses raptors rescued by Eagle Encounters and trained by members of the Falconry Society in “an environmentally-friendly means of moving nuisance or pest birds out of a territory.”

Like everywhere pigeons are often the biggest target. But the organization claims excellent success in removing starlings and Egyptian Geese as well. (Egyptian Geese are for all practical purposes the Canadian Geese of the African continent.)

The very presence of a raptor much less an actual kill attempt is enough to move nuisance birds, according to the organization.

By the way, most South African falconers’ birds and all Eagle Encounters’ rescues which can be wholly rehabilitated are reintroduced into the wild. This is easily facilitated by replacing the “mock-up” prey with something real like a mouse, as the bird is prepared for release. Slowly but surely it learns the “real treat” comes with the kill.

At the same time Eagle Encounters is quick to point out many rehabilitated raptors won’t survive in the wild, particularly when they’re rescued at a very early age and become so completely habituated.

I know how annoying pigeons and geese sometimes seem. I’ve patiently lived through many friends’ ardently removing garlic mustard from their woods. In the end, though, my undying loyalty to the life form has proved the strengths of natural selection and the weaknesses of man’s pitiful attempt to tinker with nature.

But in this case? Hm.