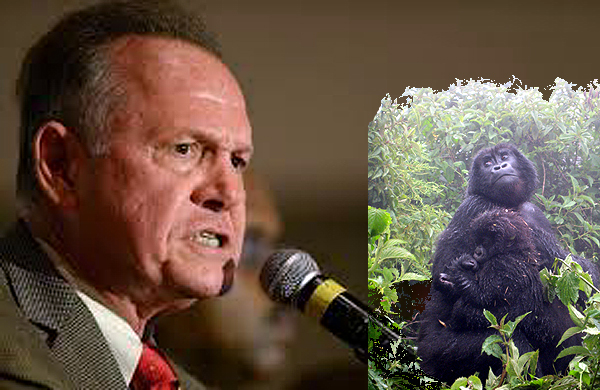 Mountain gorillas love wild celery. It’s their favorite food. They learn early on that it grows best at forest edges. So they often forage forest edges hoping to find patches of wild celery.

But men go much further. Men harvest and cultivate seeds. They know that if they pollinate the best stalks they can ultimately harvest a much better form of celery. Gorillas can’t do this. They can’t think that far.

The greatest difference between men and Africa’s great apes is this complexity of syllogistic thinking, reasoning a series of logical truths to form a conclusion. The Republican National Committee and the supporters of Roy Moore are not syllogistically thinking unless they mean to lie.

I watched over a period of time with enormous fascination the silverback of the first mountain gorilla family ever to be habituated, Titus, the chief of Family 11.

Field scientists chose Titus to habituate first because he had only one hand. He’d probably lost the other one in a snare. With only one hand he was less dangerous. It also made him a weak gorilla leader, less able to protect his family. When scientists first found him he never had more than three or four other gorillas with him.

But over time the interaction between Titus and the field scientists created a bond that greatly enhanced Titus’ power. With scientists coming daily to watch him (and later, tourists), Titus forged the most protected family in the Virungas. Poachers weren’t going to mess around with a family that got human visitors every day!

At one point Titus reigned over 24 other gorillas and he lived to a ripe old age. I’m absolutely sure that other silverbacks noticed Titus’ success, and that that was crucial to scientists habituating so many other gorilla families.

Titus displayed an awful lot of syllogistic thinking. But finding wild celery and befriending humans for protection is still not as smart as sending someone to the moon and bringing them back.

If we’re faithful to our syllogistic thinking, we’re being truthful. We can never be 100% certain of anything, so it’s not possible to be 100% truthful. But where lies the divide between being truthful and lying?

Even great apes lie. Walking down a lumber path in the remote Kibale jungle in Uganda with four of my clients, I kept thinking someone was following us. At first I simply stopped and looked back – nothing. We started walking again and I swore I heard rustling behind us, so I stopped again. Still, nothing.

But the rustling got louder and closer and so in a soft voice I told the others with me to keep nonchalantly walking up to a bend in front of us, then on my signal to hide in the forest and wait for me to give the all clear.

We cleared the bend, I gave the signal to hide, and everyone enthusiastically melded into the thick jungle.

We all watched the chimp family round the bend and hesitate as they looked for us. When they finally discerned us in the forest, like a battalion of Spidermen they jumped into the forest screaming wildly!

The chimps were lying. They wanted us to think they were somewhere other than where they were. If it were something different, like they really enjoyed the lumber path and had to use it to get to some place to eat but were afraid of us, then they would have waited patiently like all animals for us to go away. They were hardly starving. In fact, I think they were having the time of their lives!

But trying to convince someone that you aren’t where you know you are isn’t as great a lie as saying that Roy Moore wasn’t a sexual predator.

Roughly a third of America supports supports Roy Moore and a lot of them live in Alabama. Now I could deal with this much better if they just said that they didn’t think sexual predation disqualifies Moore from being a Senator, or even: that a sexual predator is better than a liberal as a Senator now. I disagree with that but it’s logical. I know that in early man societies – fully syllogistic thinking humans – the way Moore behaved was probably the standard for many males. I know that there are many places in the world today where that type of behavior gets a pass.

So while I disagree, I’d still respect the person thinking this as a fellow human that I have to listen to.

Those who deny this are either liars or blind followers, and if you’re a blind follower you better watch out. If you’ve been brainwashed to believe this, you can be made to believe most anything. You might be convinced to leave your job or family, or commit a crime, or even to kill — to become a suicide killer.

This is a profound moment in human history. This is when we’ll decide that we will govern ourselves using the reasoning so unique to human beings. It’s the moment we decide if we’re humans or beasts.